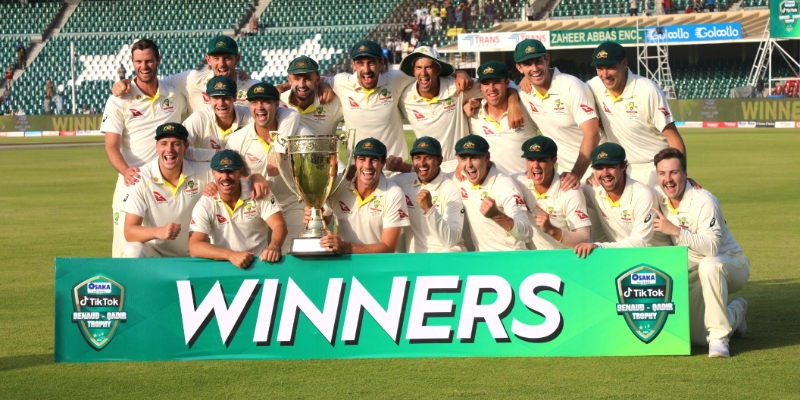 Pat Cummins led Australia recorded a massive win in the 3rd and the final match of the 3 match Tets series between Pakistan and Australia to record a win in Pakistan after a massive gap of 24 years, which is a historic moment.

The series was level going into the 3rd match with a 0-0 scoreline after both the previous two matches ended in a draw. Pat Cummins won the toss and decided to bat first.

Usman Khawaja was in great form, adding 91 runs after David Warner and Marnus Labuschagne were dismissed early on. Khawaja added a great partnership with Steve Smith, which helped them put 391 runs on the board.

Pakistan could only manage to add 268 runs in their first inning. After a great start by their top order batsmen, the middle-order and lower-order failed to deliver. Australia added another 227 runs to their previous lead with Usman Khawaja once again playing a key role, but this time managed to convert to hundred as he scored 104 runs not out.

Australia captain Pat Cummins took a big call and declared the inning for 227 runs, setting a target of 351 runs for Pakistan with 1 session on day 4 and the 5th day’s play entirely left. It led to questions being raised on his decision, and it further ignited when Pakistan got off to a good start.

But the Pakistan team faced a collapse on the 5th day as they were dismissed for 235 runs, giving Australia a 115 runs victory in the match, and they also won the series.

With the series win, Australia further strengthen themselves at the very top of the World Test Championship 2021-2023 Points Table. Australia has now played 2 series and has won 5 matches and drawn 3, which takes their percentage to 75. As for Pakistan, they fallen massively to 4th place in the points table, behind South Africa and India. Pakistan now has played 3 series and has won 3 matches, lost 2 matches and drawn 2 matches, which takes their percentage to 52.38.

South Africa is currently 2nd with 60 percentage and India is third with 58.33 percentage.