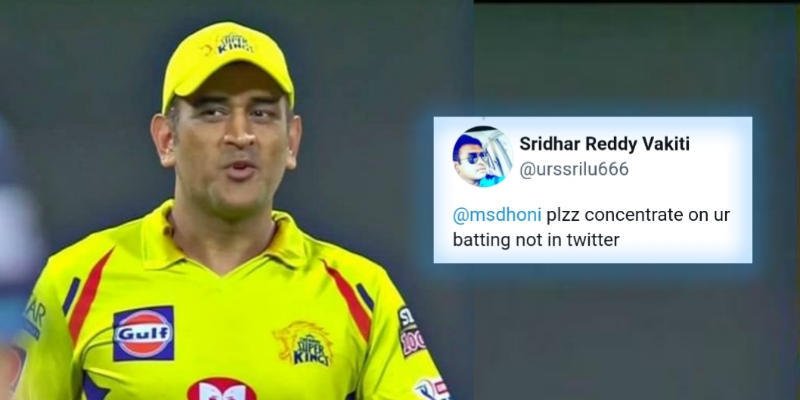 MS Dhoni has retired from all formats of international cricket now, and he made the big announcement via a post on his Instagram account. The right-handed batsman played a vital role in the massive success that the Indian cricket team achieved. India won the 2011 Cricket World Cup under MS Dhoni. Also, the Men in Blue lifted the 2013 Champions Trophy and the 2007 T20 World Cup under his captaincy only.

While MS Dhoni rarely posts anything on social media these days, there was a time when the Chennai Super Kings captain often posted tweets on his official Twitter handle. He even had a good sense of humor as he trolled his teammates and even the fans who tried to criticize him.

Back in July 2012, MS Dhoni had posted a tweet, where he asked his fans to spot the difference. However, a fan tried to remind him that he must concentrate on his career as a batsman, only to receive a savage response from the then Indian cricket team captain.

“MS Dhoni plzz concentrate on ur batting not in twitter,” the fan wrote. Soon, MSD replied to him – “sir yes sir, any tips sir.”

@msdhoni plzz concentrate on ur batting not in twitter

Can Chennai Super Kings win IPL 2021 under the captaincy of MS Dhoni?

While Dhoni has quite international cricket, he is still active in the IPL, where he is leading the Chennai Super Kings team. Dhoni’s team will resume their IPL 2021 campaign against the Mumbai Indians on September 19. It will be interesting to see if CSK can win the championship. It will be a tough task for the team, given their record in the UAE last year, but Dhoni is a player who knows how to make his team win the trophy.