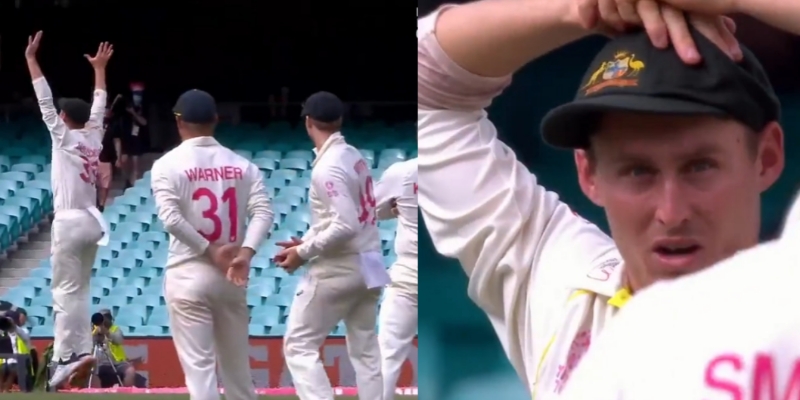 A comical incident occurred on the final day of the Sydney Test in the ongoing Ashes. Marnus Labuschagne, who is known for his quirky antics, was at the centre of it. In this article, we take a look at Marnus Labuschagne’s hilarious appeal for a caught behind.

Australia was looking to bowl out England to go 4-0 up in the series. Pat Cummins was in top form and the struggling Jos Buttler was up against him. In one of the deliveries, there was daylight between the bat and the ball and yet, Marnus Labuschagne went up appealing for the wicket. None of the other Aussie players, including the bowler and the wicket-keeper, got any sight of it. Marnus, after noticing that no one else has gone up, realized that he was the only one appealing for the edge. All of it ended in a comical sequence, which even went to the social media handle of Cricket Australia. Here is a look at the clip:

Let's give Labuschagne an E for Effort on that appeal 😂 #Ashes pic.twitter.com/To5SxDKPMJ

Marnus Labuschagne is a top-rated Test batter but ever since he has made his debut, he has also become popular for his hilarious antics. Be it calling for ‘no-run’ or his relationship with Steve Smith, many of it has provided entertainment to the viewers.

Meanwhile, the Sydney Test has ended in a thrilling draw. Australia was looking to win the game but the last few batters in the English line-up managed to survive. Pat Cummins had to call upon Steve Smith, who also delivered a wicket for his captain. In the final over of the Test match, England was nine wickets down and the No.11 batsman James Anderson had to survive the delivery by Steve Smith. The ball was not threatening and Anderson defended it confidently.