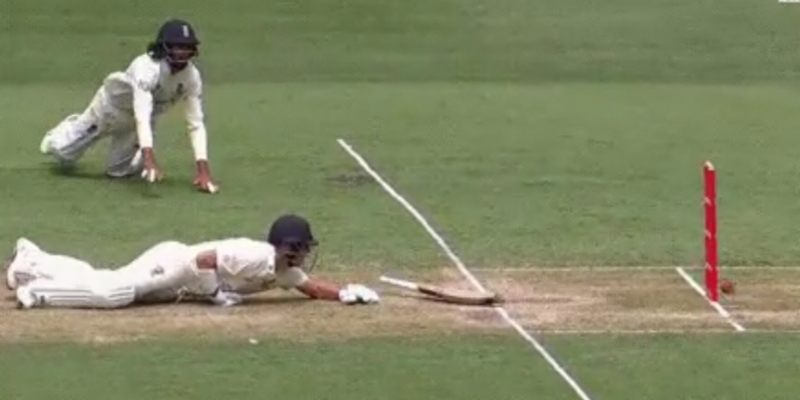 The Ashes was kickstarted at the Gabba on Wednesday. England was bundled out for 147 in the first innings, and Australia is taking control of the game. Meanwhile, there was an incident that could have ended Warner’s stay at the crease but he somehow escaped. In this article, we take a look at the video in which David Warner survives a runout under hilarious circumstances on Day 2 of the first encounter.

Until a few weeks ago, there was a lot of concern about David Warner’s form. However, after winning the Player of the Tournament at the 2021 T20 World Cup, he managed to clear the doubts. Although his place in Test XI was never in question, Warner has arrived at the Ashes with renewed confidence.

Meanwhile, during his stay at the crease, there was a funny incident. The southpaw played the ball to a close-in fielder but could not get back to the crease in time. He slipped and tried his best to throw his bat past the crease but could not do it. The fielder too, despite the short-range, could not hit the stumps. He could have almost got Warner out even if he had taken the balls and run and hit the stumps. Hence, the Aussie opener survived and has already made a fifty.

Australia is off to a great start

As expected, Australia has begun well in the first game. The Englishmen could not score more than 147 runs in the first innings. The bowlers, too, have been ineffective so far, with the Aussies getting to the lead without a lot of hiccups. If rain does not play a spoilsport, Australia is on course to win this game.