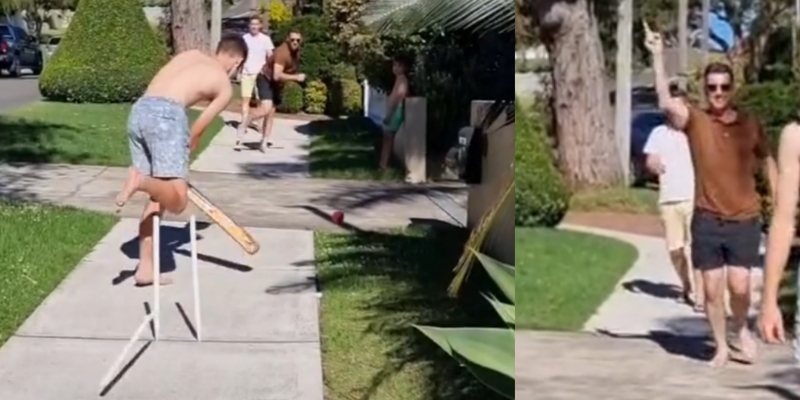 Brett Lee is one of the most popular pacers of this era. With his clean action, Brett troubled batsmen across all formats of the game. Even now, it seems Lee has got the bowling accuracy still in him. In this article, we take a look at the video in which Brett Lee clean bowls his son while they play cricket in their backyard.

Brett Lee, who played for Australia, was found playing backyard cricket with his son Preston and brother Shane Lee. In the video, it is seen that Lee shows no mercy to his son as he gets him clean bowled with a pinpoint yorker. Preston’s middle-stump was uprooted in the process and he could not stop himself from being awed at his father’s delivery. Brett’s brother Shane, too, was happy with the ball. Here is a look at the video:

One of the fiercest pacers the game has seen

Brett Lee is one of the all-time greats in the area of fast bowling. Having made his debut in 1999, Lee enjoyed a fine stint at the top for almost close to two decades. In between, he played 76 Tests, 221 ODIs and 25 T20Is for his nation. While Lee collected 310 Test wickets, he picked up 380 scalps and 25 wickets in ODIs and T20Is, respectively.

Along with the likes of Glenn McGrath, Lee was part of the dominant Aussie Team that won multiple ICC trophies. Lee has also been part of a few successful World Cup campaigns. The pacer was also part of IPL franchises such as KKR and Punjab.

One of the major strengths of Brett Lee was his pace and accuracy. After retirement, Lee has involved mostly in broadcasting. It is a surprise that no T20 franchise has hired him as one of their bowling mentors. This is because he is a thinking cricketer and could be of great use in the backroom.

Watch: Rahul Dravid Dancing After The Win Against South Africa In The First Test
Watch: Umpire Gives ‘Out’ And Later Changes to ‘Not Out’ After Batsman’s Suggestion In BBL Game
To Top