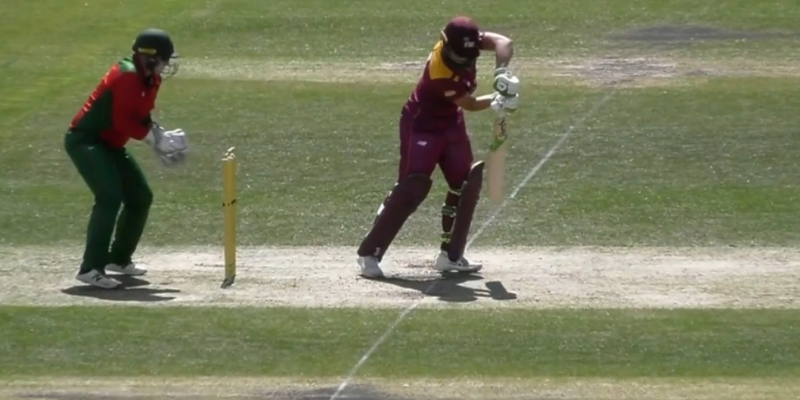 In a bizarre incident that happened in the women’s domestic cricket match of Australia, a batter was given not out despite she lost her stumps just because no one from the fielding team appealed for it. The umpire did not adjudge the batter out.

Generally, in the game of bat and ball, the batter is declared out when he or she loses their stumps. It is just a formality, and often we do not see the umpires raising their finger to rule the batter when they lose their stumps. However, in a domestic cricket match between the Tasmanian women’s team and the Queensland women’s team, the batter Georgia Voli was not asked to return to the pavilion although the bowler rattled her stumps.

Queensland Women battled against Tasmania Women in match number four of the Women’s National Cricket League in Australia in Hobart. Queensland Women received an invitation to bat first after losing the toss. Georgia Voli opened the innings for Queensland Women along with wicket-keeper Georgia Redmayne.

The two batters had a fantastic opening partnership of 83 runs. During that opening partnership, Belina Vakarewa rattled the stumps of Georgia Voli when the score was 58. However, the batter remained in the middle as no one from the fielding team appealed for her dismissal.

Georgia Voli was dismissed soon after the unusual incident

Luckily for Tasmania Women, Queensland Women’s batter Georgia Voli soon got out after that incident. She was out on 31 runs, when the incident happened she was on 26. You can watch the video right here:

ICYMI: An odd moment in the #WNCL yesterday after replays showed Belinda Vakarewa bowled Queensland opener Georgia Voll on 26, but no one appealed! pic.twitter.com/b8w2NXIEIW

Tasmania Women won that match by five wickets. Queensland Women posted a total of 223 runs which was chased by Tasmania Women in 45.1 overs via D/L method.