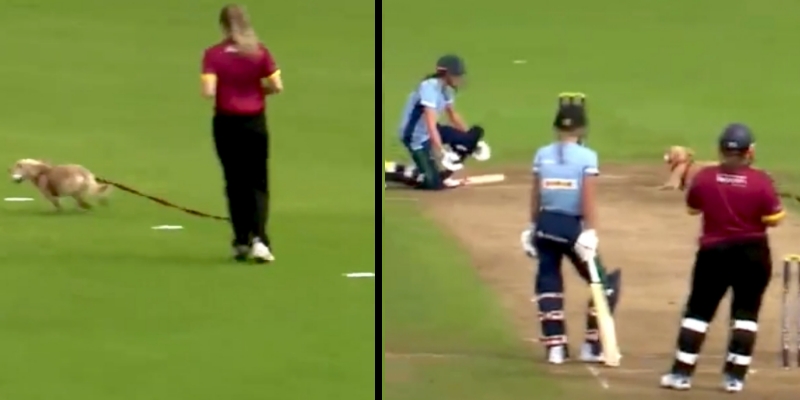 It is common to witness a human invade a cricket pitch, mostly to gain some attention. We have also seen dogs, and in some cases, birds also make their presence felt on a field. However, on one of the recent occasions, a cute puppy invaded the pitch and caused an interruption. In this article, we take a look at a hilarious video as a young puppy invades the pitch and stops the game by getting hold of the ball in Ireland.

Pitch-invaders are not new to the viewers

In recent months, Jarvo has set the tone to become a notorious pitch-invader. He came onto the field on three occasions during the recent Test series between India and England. While he came as an Indian fielder for the first time, he then appeared as an Indian batsman. At the Oval, he came steaming inside the pitch as an Indian bowler. He even collided with Jonny Bairstow on the pitch. Jarvo was banned for life at Headingly and was later arrested after he invaded the pitch at the Oval.

A young puppy invades the pitch

A dog coming in as a pitch-invader is not uncommon in cricket. We have seen it in various instances. In some cases, the players have also chased them out of the playing area. However, in the recent Women’s All-Ireland Twenty20 trophy match between Pembroke CC and Bready Cricket Club on Saturday, the same situation turned hilarious.

A young puppy came on to the pitch and at the same time, the fielding team was trying to execute a run-out. They missed it but the ball was still in play. It was at this time that the dog caught the ball and got a few of them chasing behind it. Finally, it was at the non-striker that the dog stopped and eventually handed over the ball.