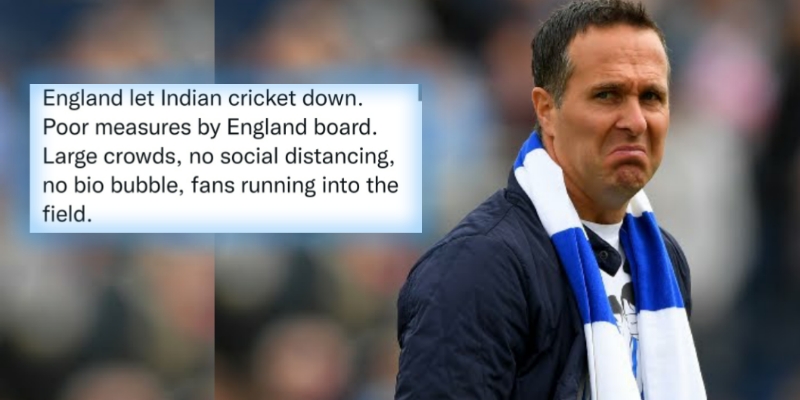 The 5th Test of the England vs India series was cancelled on Friday. While the match was on track to happen, discussions in the last minutes forced the change. Michael Vaughan reacted to the news, and later when a fan said England let down India, he dismissed the accusation.

In the Oval Test, a few members of India’s support staff had tested positive for the COVID virus. Hence, the likes of Ravi Shastri had to miss attending the stadium. A few days later, India’s second physio Yogesh Parmar also tested positive. The Indian Team was tested again and all returned with negative reports.

However, it is said that a few players were uncomfortable in playing the game. They showed concerns regarding the rising number of cases in the COVID camp. Hence, BCCI and ECB were involved in discussions and the match had to be cancelled.

Michael Vaughan is vocal about his opinions, and he quickly tweeted, “India have let English Cricket down !!! But England did let South African Cricket down!!!”. However, replying to this tweet, a fan said that it was England that let down India because they had a soft bio-bubble in place, and the crowd was allowed to the games. Vaughan said it was “Rubbish”.

On the other side, there are a few blaming Team India, as well. Firstly, Virat Kohli along with Ravi Shastri and his team had attended a book launch event which exposed the team to the virus. Then, India made the decision to not play very late which made the situation uncertain for many. There is still no clarity on when the final game will happen if it does occur.

Jarvo reacts after 5th Test match between India and England cancelled
Watch: A Young Puppy Invades the Pitch And Interrupts Play By Catching The Ball
To Top