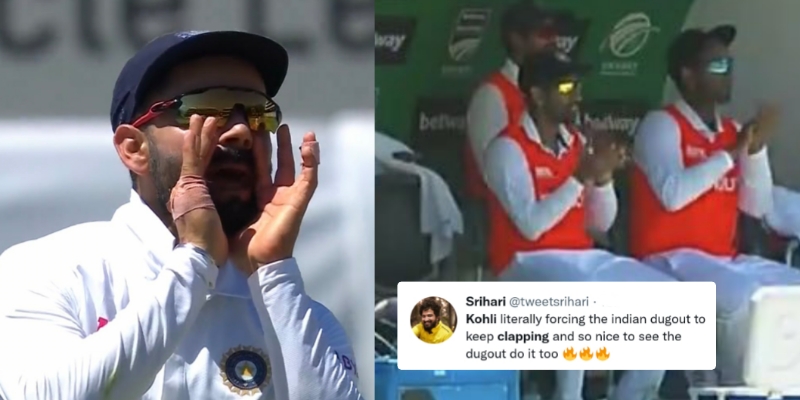 The Indian cricket team’s Test skipper Virat Kohli is known for his aggression, and the support that he brings to the team, for his teammates, has always been helpful for Team India.

And Virat was once again in action during the 3rd and the deciding Test match between Team India and South Africa at the Newlands Stadium in Cape Town.

Virat Kohli is a kind of the player who likes every dismissal of the opponent team, more than probably the bowler would enjoy after taking the wicket, and his this attitude has made him, probably the one of the best captain in cricket’s history.

His absence was felt during the 2nd Test match as he was ruled out for the match, KL Rahul led the team, in which was his first assignment as Test skipper.

But that thing zeroed out in the 3rd Test. The South African team was slowly building their inning with Keegan Petersen and Temba Bavuma forming a good partnership.

But that’s when Mohammed Shami came in and picked up two wickets in 3 balls, first Temba Bavuma and then Kyle Verreynne. At this moment, we saw Virat Kohli pumping up the Indian dugout and asking them to keep clapping, and the dugout did so in a synchronised manner.

And it was not just for nothing, the clapping did paid dividend as Jasprit Bumrah managed to bowl out Marco Jansen right at the edge of the tea break. This eventually led to the Indian bowlers completely cleaning up the South African team for 210 runs in their first inning.

The video of the above incident went viral on Social Media, and the fans praised the Virat Kohli seeing the kind of motivator he is.

Kohli celebrates the wickets.. looks towards his team dug out and shouts ‘Keep Clapping Boys.. Keep Clapping’ and this follows..

This guy just creates an amazing atmosphere in the match.. pic.twitter.com/ens77zqg3M

All the Indian players from the dug-out clapping ahead of each & every ball with Kohli supporting from the ground – this is great culture with no crowd in the venue. pic.twitter.com/eMyVMY8GXI

Virat Kohli is driving Indian Test Cricket to some greatness, it will be very difficult for anyone else to reach there from now as a captain. Inspiring second session that was, bringing Shami back into attack, dugout clapping for team on pitch and Bumrah picking Jansen before tea

His energy is contagious.. kuch bhi bolo, his presence on field was amiss in Jo’burg!