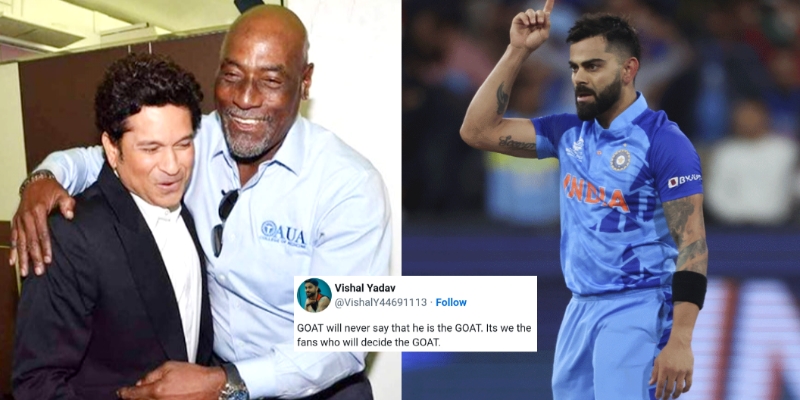 There is always a huge debate about who is the Greatest cricketer of all time in the history of the game. Current Indian cricketer Virat Kohli is one of those names who are considered among that category.

However, most recently, the former India captain has declined calling himself the greatest cricketer of all-time and named two greats of the game as the only GOATs (Greatest Of All Time) of the game.

Virat Kohli has been the talk of the town after his performance so far in the ongoing T20 World Cup 2022 in Australia. After another great inning against Netherlands, Kohli was asked about whether he is the GOAT of the game.

In reply to which, Kohli generously told the media that he doesn’t consider himself a GOAT but instead he considers Sachin Tendulkar and Viv Richards as the GOAT of the game.

Following his comment on that, fans have gained a huge respect for the Indian star batsman, while some also mentioned that he may not accept, but he is one of the GOATs of the game.

Selfless Cricketer for a reason. 🐐 pic.twitter.com/YHeZXHGRq6

well , its not about him being humble, it is just him being honest. Although he could have given a cocky answer. I am glad he didn't.

GOAT will never say that he is the GOAT. Its we the fans who will decide the GOAT.

You don't
But we will tell your story to next gen.

“He is hurt, let him cry” – Twitter reacts as Shoaib Akhtar predicts Team India will be eliminated in the semi-finals of the T20 World Cup 2022
“Deserves an IPL contract more than anyone” – Twitter reacts to Sikandar Raza’s big disclosure that his career would have ended early due to tumour and cancer
To Top