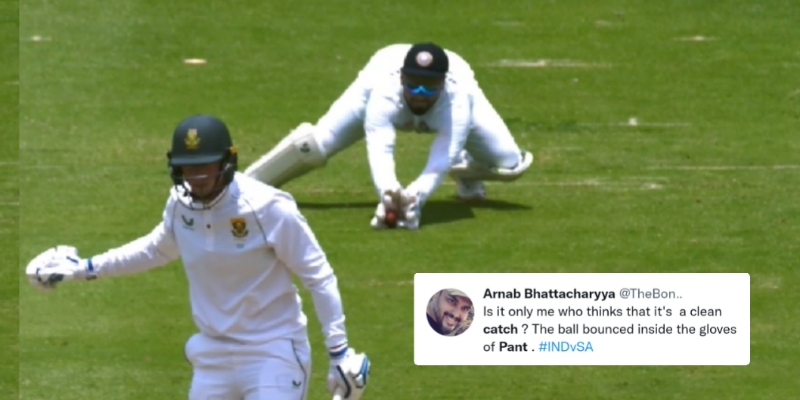 It was the 45th over of South Africa’s innings and Shardul Thakur had a delivery that managed to take Rassie van der Dussen’s inside edge. Pant caught the ball, appealed and the umpire gave it out. The South African batsman also walked to the pavilion.

However, during Lunch, the catch was checked and it seemed that the ball had bounced before falling into Pant’s gloves. There was a debate if the batter would be called back. However, that did not happen.

Twitter was brim with debates about the incident. A few felt that Team India must have called back Rassie. Another section believed the decision of the umpire was correct. We take a look at a few opinions below:

Out or not? #INDvSA pic.twitter.com/z7pZ0Foinw

What do you make of the decision not to overturn Rassie van der Dussen's dismissal on the stroke of lunch?#SAvIND pic.twitter.com/hTmduTNVC4

I won’t blame rishabh pant completely for bump catch, as a batsman u should be more worried and aware about that, stay on crease ask the umpire to check with 3rd umpire! We have seen players who even got their clean bowled confirmed by third umpire before leaving the crease!

Side on that looked as clean as take as can be. What’s the big debate? #Pantcatch

Earlier also there was a caught behind appeal which was not taken cleanly by Pant.#INDvSA #INDvsSA #SAvsIND #SAvIND Lord Shardul Rishabh Pant pic.twitter.com/B84htXZ9L1

Yep. That bounces before going in to the gloves, India should be recalling van der Dussen. Third time this morning that Pant has claimed a catch when it’s bounced, a pattern developing. South Africa should appeal for everything that hits the ground when Pant comes to bat https://t.co/AWBzLEi9Tj