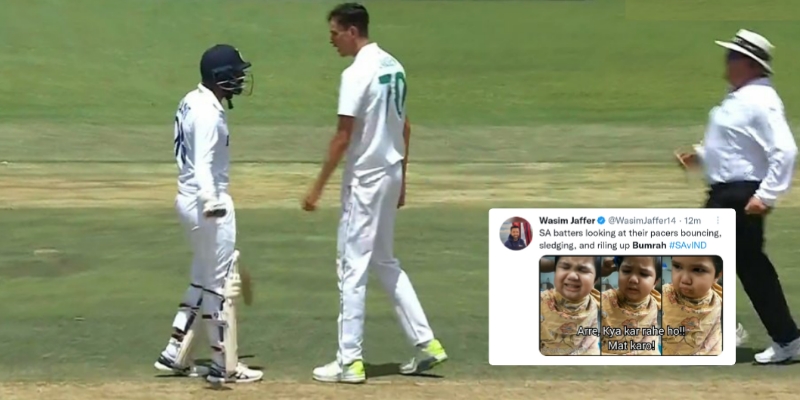 After Mohammed Shami got out, Jasprit Bumrah came out to bat. He had to face Marco Jansen and the left-arm seamer bowled a series of bouncers. A few of them struck Bumrah on his elbow. Obviously, the Indian cricketer was not impressed. He had a few words to say, and Jansen also replied back to him. Things seemed heated and umpires had to come in between. Dean Elgar also had to talk to Bumrah to calm him down.

The ongoing Test series is already producing a lot of fodder for Twitter. Day 3 saw one more and this time, it was Bumrah at the centre of it. Hence, there were plenty of reactions on the platform.

Bumrah has learnt so many good things from kohli. Absolutely loving this. 😭

Some heat between Jasprit Bumrah and Marco Jansen. pic.twitter.com/vRWswSt2NJ

jansen coming out to bat against bumrah in their 2nd innings pic.twitter.com/Wx58tVAh0s

Marco Jansen should call to Anderson after this innings for preparation against Bumrah. #SAvIND

Marco Jansen and Jasprit Bumrah having a bit of a standoff 😬

Jansen getting Bumrah all charged up.

That's really poor cricket by vhari, take the single. Get jansen to bowl to bumrah, emotions are high, and protecting him there isn't needed. Take the single and get him in strike. It's test cricket. #INDvsSA

Get the #MI reference here? pic.twitter.com/mZPf0DyeWH