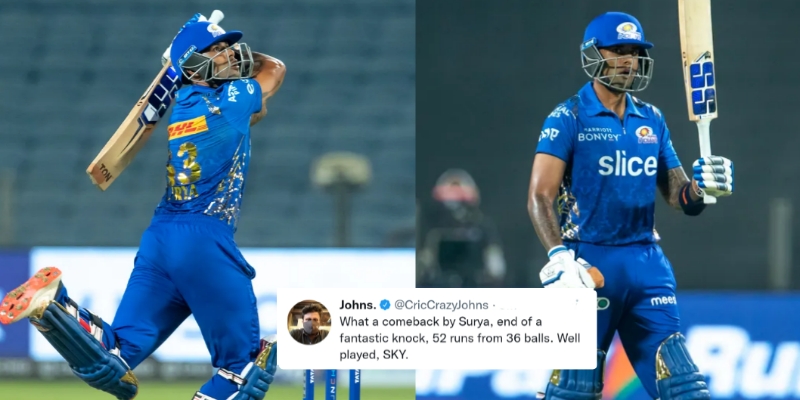 Classy Suryakumar Yadav made his return to the Indian Premier League (IPL) 2022 with a brilliant fifty plus score against his former team Kolkata Knight Riders while playing for the Mumbai Indians.

So far it’s been Suryakumar Yadav’s night. The Mumbai Indians batsman is playing his first match of the season as he was unable to play for the franchise in the initial games due to injury concerns.

But he made a solid comeback, doing what he loves to do. Mumbai were in deep trouble when he came in. Scoring runs was a big problem for them as they had only scored 50 runs from 10 overs.

While Surya started slowly, but as the overs progressed, he also accelerated his inning. He had only scored 26 runs from 22 balls, but ended up with 52 runs from 36 balls including 5 fours and 2 sixes.

Thanks to his brilliant and great assistance from Tilak Verma and Kieron Pollard, Mumbai Indians has posted 161 runs on the board, meaning that Kolkata Knight Riders (KKR) will need 162 runs to win the match.

What an asset for team India @surya_14kumar SKY🙏 can't believe they kept him out for so long #SuryakumarYadav.

Cometh the hour, cometh the man! Making a comeback from injury and Mr. 360 is on his way to scoring important runs for his team. By far, the most valuable player and the way he scores runs is just second to none. #KKRvsMI #IPL2022 #SuryakumarYadav @surya_14kumar pic.twitter.com/QdF8rz4li6

#Sky has no limits. #SuryakumarYadav the man should play at number 3

#IPL2022 was missing the brilliance of #SuryakumarYadav. I'm glad he is back.#MumbaiIndians

Surya Kumar yadav right now he was never in break what a innings and what shot making absolutely eye pleaseing to watch him play even Tilak verma shout out to him great great sign for #MI #KKRvsMI #SuryakumarYadav #sky pic.twitter.com/FMjcjehZyd