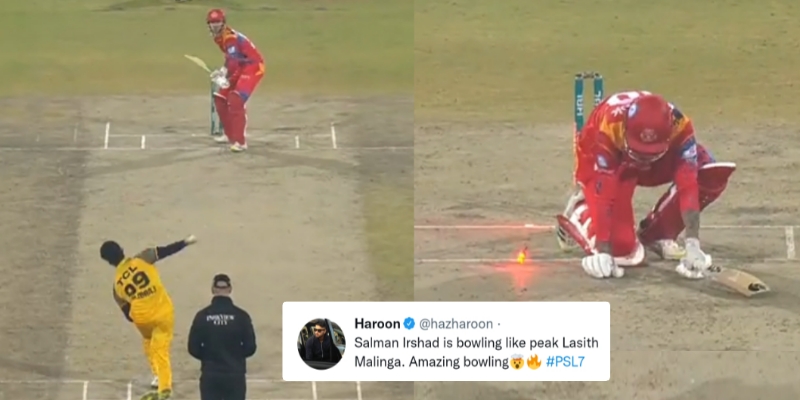 The Eliminator 1 of the Pakistan Super League (PSL) 2022 took place on the 24th February in Lahore’s Gaddafi Stadium, where the Islamabad United came out victorious in a thrilling encounter.

Islamabad United won the match with 5 wickets in hand and with only 3 balls remaining. English opening batsman Alex Hales was the main catastrophe behind their successful run chase as he scored 62 runs off 49 balls.

However, he was dismissed by a deadly yorker by Peshawar Zalmi’s 26-year-old pacer Salman Irshad, reminding everyone of the great Sri Lankan pace bowler Lasith Malinga.

Talking of the match, opting to bat first after winning the toss, Peshawar Zalmi could only post 169 runs for the loss of 5 wickets on the board, setting up a target of 170 runs for the Islamabad based team. Kamran Akmal and Shoaib Malik both scored over 50 individual runs.

In response to which, Alex Hales was leading the team’s charge as the other end failed to convert their start to a big score. After Hales’ dismissal, it was Fahim Ashraf and Liam Dawson who played the most important knock for Islamabad, where the former scored 19 runs of 13 balls, while the latter scored very crucial 10 runs in 2 balls, taking the team over the boundary line.

However, the video of the yorker delivary from Salman Irshad has been making headlines on social media ever since then.

You will not see many better yorkers than this by Salman Irshad to Alex Hales 🔥
One of the best yorker so for in this season! very impressive 👏#PSL2022 pic.twitter.com/3jRdXfWcAz

Delivery of the tournament for me. Hales didn't see it coming. Salman Irshad has bowled exceptionally well in #PSL7. pic.twitter.com/LHQfUCOgcv

This is Malinga-esque from Salman Irshad. Has broken open the game in 3 balls dismissing both Hales and Asif Ali.