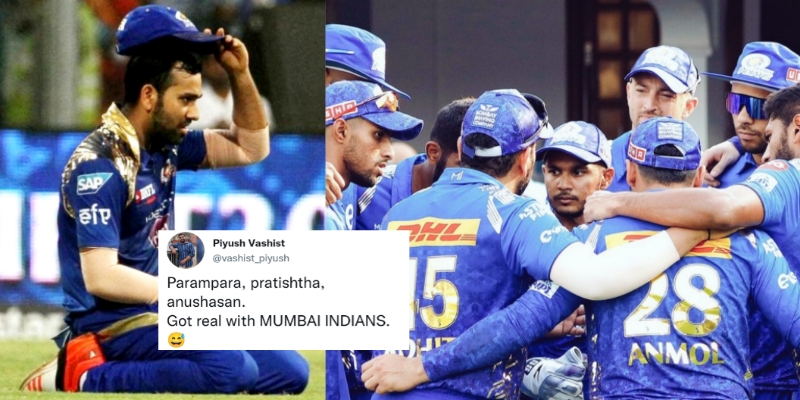 Mumbai Indians once again did not get off to a great start in their opening match of the Indian Premier League (IPL) 2022 campaign, just like the past, and the fans thinks it has not become a ritual for Mumbai to not opening the match, but go on to win the entire thing.

After winning the toss, Delhi Capitals opted to bowl first. It was a firing start from the Mumbai side, with opening duo of Ishan Kishan and captain Rohit Sharma adding 67 runs from about 9 overs.

Kuldeep Yadav became a pain for the Mumbai batsmen as he registered 3 wickets of Rohit Sharma, Anmolpreet Singh and Kieron Pollard. However, Ishan Kishan kept on going and took his team to a winning position. With his individual score of 81 runs not out, Ishan helped Mumbai post 177 runs on the board.

Chasing a target of 178 runs, the match went out of Delhi’s hand when they already half the team back in the pavilion for the score of 72 runs, inside 10 overs.

However, Lalit Yadav played a crucial inning to take his team over the line. He scored 48 runs and remained not out. He was well partnered by first Shardul Thakur and then Axar Patel, who himself played a firing knock of 38 runs from 19 balls. Delhi Capitals, at once stage was in the brink of a devasting loss, managed to walk past all the drama and won the match by 4 wickets, with a over still remaining.

However, the talking after the match is how Mumbai Indians have lost another of their opening match in an Indian Premier League (IPL) campaign. However, they have proved to be a better team throughout the season and went on to lift the Trophy 5 times.

Pic 1 : Other teams fans after losing the first match