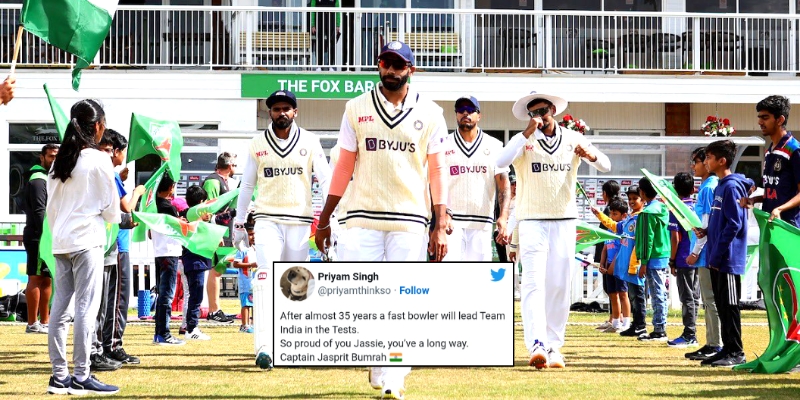 The Board of Control for Cricket in India (BCCI) has today officially announced that pace bowler Jasprit Bumrah will be leading the Indian team in the rescheduled 5th Test match against England.

The 2021’s 5 match Test series between India and England was halted mid-way through after 4 matches after several of the Indian team’s member returned COVID-19 positive.

And with the IPL in horizon, the BCCI and England and Wales Cricket Board (ECB) decided to reschedule to the last match, the series decider to 2022 and make involved when India tours England.

But, with the just couple of days before the match, Indian team’s captain Rohit Sharma tested positive to COVID-19 and has been in isolation ever since.

As a return that, there were lots murmuring about who will be India’s captain for the match as Virat Kohli has resigned as captain of the team too

Now the BCCI has officially confirmed that Jasprit Bumrah will be the Indian team’s captain for the series. With this, since after 1987, Jasprit Bumrah has become the first pacer to captain India.

The Indian team’s are also excited with the development that Bumrah will be leading the team.

Confirmed – Jasprit Bumrah will be India's captain in the 5th Test against England. Rishabh Pant to be the Vice Captain.

Pat Cummins and Jasprit Bumrah are leading their respective sides. What a moment in Test cricket. Great to see the two best Fast Bowlers do this. #fastbowlingera https://t.co/yTrzqx7QfE

From being branded as "not Test Match material" in 2018 to going on lead India in 2022, Jasprit Bumrah has achieved so much in such a short span of time.

India's best ever pace Bowler will scale many more such heights and he doesn't need any Trophy/Cup to prove his credentials.

For the first time since 1987, Jasprit Bumrah – a fast bowler will lead India in a Test match.

After almost 35 years a fast bowler will lead Team India in the Tests.
So proud of you Jassie, you’ve a long way.
Captain Jasprit Bumrah 🇮🇳