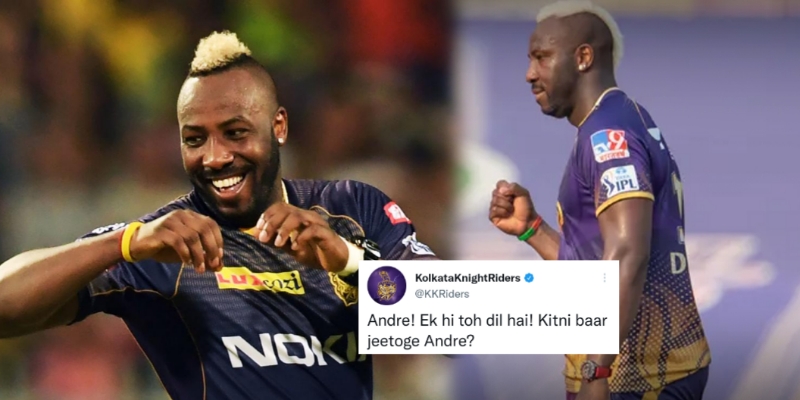 Andre andar, gend bahar we have heard, but today, it was different, today it was Andre andar, batsman bahar as Kolkata Knight Riders all-rounder Andre Russell took 4 wickets in the last over of the Gujarat Titans inning.

Match number 35 of the Indian Premier League (IPL) 2022 is being played between the Kolkata Knight Riders (KKR) and the Gujarat Titans in Mumbai’s DY Patil Stadium.

It was Hardik Pandya who won the toss and decided that his team, the Gujarat Titans will be batting first. Former Kolkata Knight Riders batsman Shubman Gill didn’t had a great game, and was dismissed by Tim Southee for 7 runs.

Hardik Pandya came in at number 3 and took it to the bowlers. He took charge of scoring runs while Wriddhiman Saha was playing his second fiddle.

While it was looking likely to be a big scoring game for Gujarat, Kolkata Knight Riders came back well and stopped them for 156 runs. And probably the last over by Andre Russell played a big role in stopping them for less than 160 runs.

Andre Russell is a very important member of the Kolkata Knight Riders and has so many times been their savior with the bat. This time, it was different, he had the responsibility to bowl the last over and he delivered, taking 4 wickets in that over.

Twitteri was surprised to see such an outstanding display with the ball from Andre Russell.

Four wickets in an over😯

4-5 is it a football score line?
Only Legend Russell can do this type of stuff 🤣🙏🏼 pic.twitter.com/yeczbH5Qap

Russell man changed the whole Dream11 game in one over 😲

“Thanks Watson for calming him down”, Twitter reacts to Shane Watson calming Rishabh Pant amidst the last-over drama
“23rd April not a good day for RCB” – Twitter reacts as RCB inning falls down like cards vs SRH
To Top