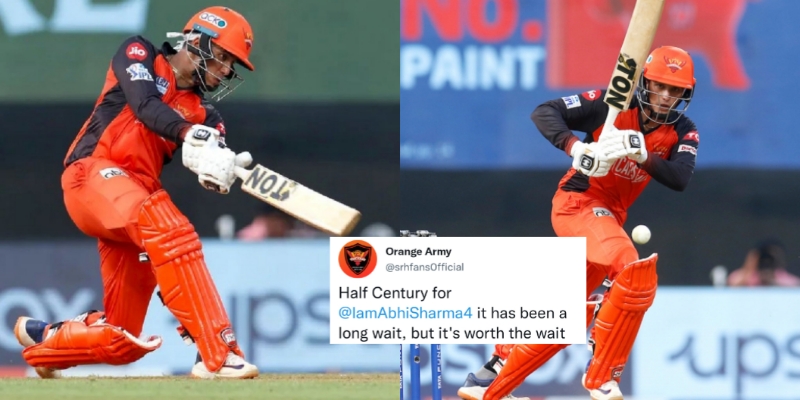 After receiving a much lot of criticism from the cricket fraternity in Twitter because of his poor run of form for Sunrisers Hyderabad, Abhishek Sharma has finally scored his first fifty in the IPL.

Match number 17 of the Indian Premier League (IPL) 2022 is being played between Chennai Super Kings and Sunrisers Hyderabad in Mumbai’s DY Patil Stadium.

Sunrisers Hyderabad is currently chasing the target of 155 runs set by the Chennai Super Kings. Abhishek Sharma and Kane Williamson opened the inning for the SRH.

They were a lot of pressure on Abhishek Sharma, the young left-hand batsman, as he has failed to contribute with big score while opening the inning.

Abhishek played a role more of a all-rounder in the last couple of years, but has been promoted to opening for IPL 2022, which further added pressure on him to score more runs.

While he failed to score big in the previous matches, he has taken the opportunity very well against CSK and scored his first IPL career fifty.

As of writing this article, Abhishek is leading charge in chase of the target as he has scored 73 runs from 15.4 overs, with SRH still needing 30 runs from the last four overs.

Twitterati also changed their opinion and praised the youngster for his brilliant inning. Here’s how Twitter reacted to Abhishek Sharma scoring his first career fifty.

@YUVSTRONG12 @ShubmanGill @IamAbhiSharma4 Yuvi Paji finally Abhishek Sharma and your two little brothers got to fifty back to back I think you are so happy for them. Back sharma to score 75 runs today.

Fifty by Abhishek Sharma, a fantastic knock by the youngster. Under pressure of a scoring runs, he delivers for SRH today.

It took long but Abhishek Sharma with his maiden IPL century & is still going on. Shubman should be happy for his friend. And his opening partner was playing at the strike rate of 82, Williamson 32 of 40.

Taken him 25 games to get his maiden IPL fifty.. But hope this is turning point and he makes these valuable knocks a habit .. Quality young talent who’s stepped up this evening .. #AbhishekSharma #CSKvsSRH