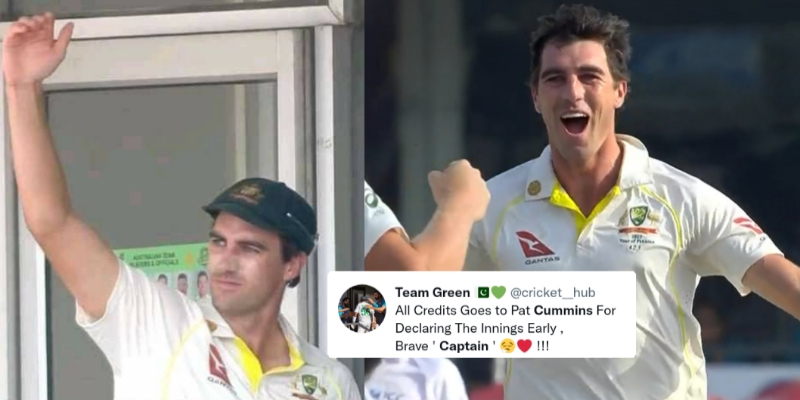 Australian cricket team‘s Test captain Pat Cummins played a bold move of declaring early on day 4 of the match setting up a target of 351 with 1 session and a day’s play was still left to be played, but that decision turned quite well for the Aussies, who went to take victory in the match as well as the series.

Going into the 3rd Test match in Lahore, the last of the three match series, it was set to be a top class series decider with previous two matches having ended in a draw. And a victory third match would not only means a victory in the match, but also the series.

Having won the toss, Australia decided to start the proceeding with the bat as David Warner and Usman Khawaja started the inning for the Aussies. However, Shaheen Afridi gave them two early blows before Usman Khawaja went on to score 91 runs, and with big assist from Steve Smith, Australia at the end managed to put 391 runs on the board.

Pakistan had no answer to Australia’s destructive bowling as even after the top order gave them a good start, the lower order failed miserably as Pakistan were all out for 268 runs in their 1st inning.

Australia then added 227 runs further to their lead, setting up a target of 351 runs for Pakistan. Khawaja scored a century, while David Warner scored 51 runs. It was a bold call from Australia skipper Pat Cummins, who decided to declare the inning with 1 session and a day’s play left.

It further added to Australia as opening duo gave Pakistan a great start, raising questions over Cummins’ decision. However, when the 5th day’s play began, Pakistan had no answer to Australia’s bowlers. Nathan Lyon went on to take 5 wicket, while Pat Cummins gave Australia some big blows, proving his decision a right one.

At the end, Pakistan could not manage to stay on the crease till the end and were dismissed for 235 runs, giving Australia the match by 115 runs, handing them the series Trophy as well, which the Aussies will remember.

However, after the match ended, fans around the world praises Pat Cummins’ bold decision to declare the inning and go for a result, which at the end, went with them.

A phenomenal historic series for Australia with the bat and with the ball. A confident declaration by the Pat Cummins leads to series win against Pakistan. Congratulations Team Australia 👏#PAKvsAUS #PakistanCricket pic.twitter.com/YeCZwuUpx6

No matter the result today, I will still say it was a brilliant and brave declaration from Pat Cummins

This is why Test cricket is beautiful#PAKvAUS

Fast bowlers are naturally aggressive and he showed that Aggression with a brave decision of declaration with 350 run lead which left Pakistan with an equal chance of win. In The end Australia did what they're best at.#PAKvAUS #AUSvPAK pic.twitter.com/hxMO4wbc6B

It was a brave declaration considering what happened in the second test. But the one that separates a good captain from a potentially great one.