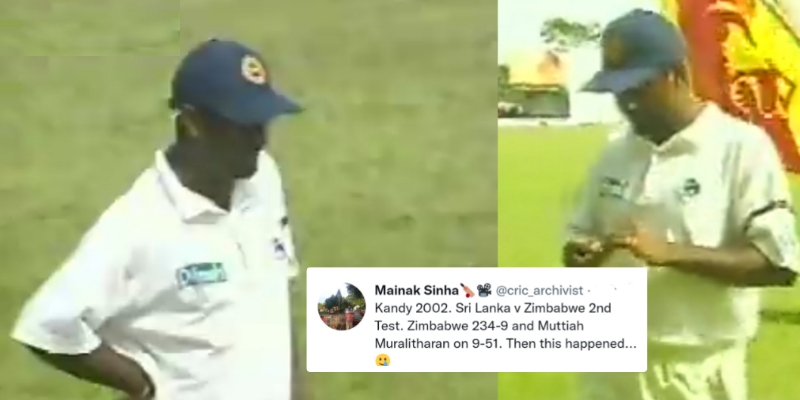 Muttiah Muralitharan is one of the greatest bowlers to have been part of cricket. The Sri Lankan spinner is the highest International wicket-taker so far. However, in his career, one record he missed was collecting all ten wickets in an innings. In this article, we take a look at an instance when Muttiah Muralitharan missed a golden chance to pick all 10 wickets in an innings.

Muralitharan is the highest wicket-taker in the game

Recently Ajaz Patel picked up ten wickets in an innings against Team India. Before the New Zealand cricketer, Jim Laker and Anil Kumble had achieved the feat. Despite being the best during his time, Muralitharan somehow could not do it.

In 133 Tests, he collected 800 wickets while in 350 ODI matches, Muralitharan picked up 534 scalps. He also has 13 T20I wickets to his name. The Sri Lankan happens to be one of the very few players to have secured more than 1000 International wickets.

Back in 2002, Muralitharan missed a golden chance to collect all ten wickets in an innings. This happened at Kandy in the second Test against Zimbabwe.

The spinner had already collected nine wickets and he just needed one more to claim a rare record. Chaminda Vaas had to bowl one over and he mostly tried staying away from taking a wicket. However, there was one ball that seemed close to the bat. The wicket-keeper collected it but hardly anyone asked for the wicket. However, there seemed to be a sound of an appeal and the batsman started walking away. Thus, under bizarre circumstances, Muralitharan missed a golden opportunity.