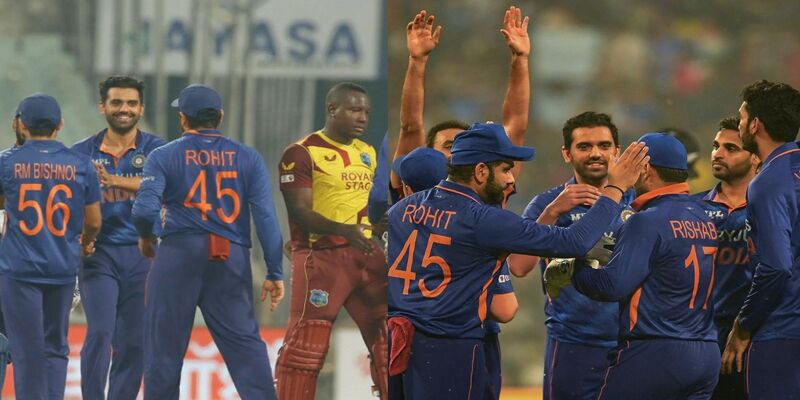 The second T20 international between India and the West Indies was a nail-biter. Both teams were equal until the penultimate over of the second innings. And eventually, it was India who held their nerves and won the second match to take an unassailable lead in the three-match T20I series. And with the win, India became only the second team in the history of T20I cricket to win 100 matches.

India won their 100th T20I match on Friday against the mighty West Indies by 8 runs. After winning the toss, Kieron Pollard asked the home team to bat, but the Men in Blue didn’t start well. Ishan Kishan’s struggle continued in the second match as well, where he went for just two runs. Kohli and skipper Rohit tried to build a partnership, but in doing so, the skipper lost his wicket.

Suryakumar Yadav, who showed some good form in the first T20I, didn’t do much as he got out after just making 8 runs. Virat Kohli (52 off 41 balls) scored his half-century, but soon he too fell to Roston Chase, becoming his third victim. Indian team was struggling at 106/4 and it was looking like India would get bundled out around 160. But then came the fifth wicket partnership between Rishabh Pant (52 off 28) and Venkatesh Iyer (33 off 18 balls). Both batters added a quick 76 runs off just 35 balls and helped India reach a competitive target of 186 runs. Vice-captain Pant also scored his unbeaten half-century.

Defending the target, Indian bowlers didn’t allow them to score runs at the start, especially the spin bowlers. Both Bishnoi and Chahal picked up one wicket each and helped the team edge ahead of the West Indies. But the partnership between Nicholas Pooran and Rovman Powell brought the West Indies back into the game. Both batters smashed Indian bowlers and added 100 runs for the third wicket in just 10 overs. However, in the end, it was the Indian bowlers who held their nerve and brought India out of the loss. It was the penultimate over of the veteran bowler Bhuvneshwar Kumar, who had just given four runs, when West Indies needed 29 runs in two overs.

With this win, the Men in Blue became only the second team, after Pakistan, to win 100 T20I matches. Indian team achieved this feat in just 155 games, losing 51 and 4 matches ending in no results.

India has a win percentage of 65.23 as compared to Pakistan’s of 64.4. The Men in Green have played 189 matches and won 118 of those. Among the top ten ranked teams, only Afghanistan has a better win percentage of 67.97, having played more than 50 T20Is.