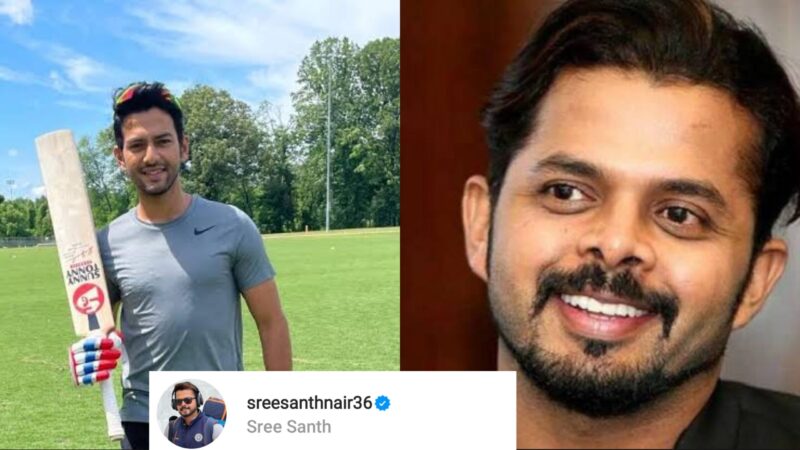 Indian cricketers retiring and taking a new step in somewhere else has become a thing in Indian cricket scenes as in the past couple of months, several cricketers have retired from Indian cricket and have joined some other country, especially the United States. Sreesanth sent a message to Unmukt Chand recently.

After retiring from Indian cricket to join the USA, the many players who moved out of India are India’s captain who leads the Indian team to Under 19 World Cup glory in 2012, Unmukt Chand.

Unmukt Chand retired from Indian cricket to take up a new journey in his cricket career in the US. The U-19 World Cup-winning captain scored his first 50 in the USA and shared his delight through his social media that reads, “First official 50 on US soil,” with a video showcasing his batting.

Under that post, India bowler Sreesanth replied, “Congratulations and keep at it, sky is not the limit bro, keep growing and keep glowing,” with some red heart and bat and ball emojis.

Unmukt Chand was considered the next big in Indian cricket. Everyone was expecting Unmukt Chand to break into the Indian national team just like Virat Kohli after his success as India U19 captain.

Unmukt Chand was the hero of the final as he scored a brilliant 111 runs in the final against Australia in response to their 225 score. India comfortably chased down the target, all thanks to Unmukt Chand’s century; he got help from Smit Patel at the other end, who has also moved to the USA.

However, after that successful World Cup, Unmukt Chand’s career didn’t pan out the way he might have thought as the opening batsman struggled. In the 21 IPL matches, he only scored 300 runs. In 67 first-class matches, he could manage to score 3379 runs.