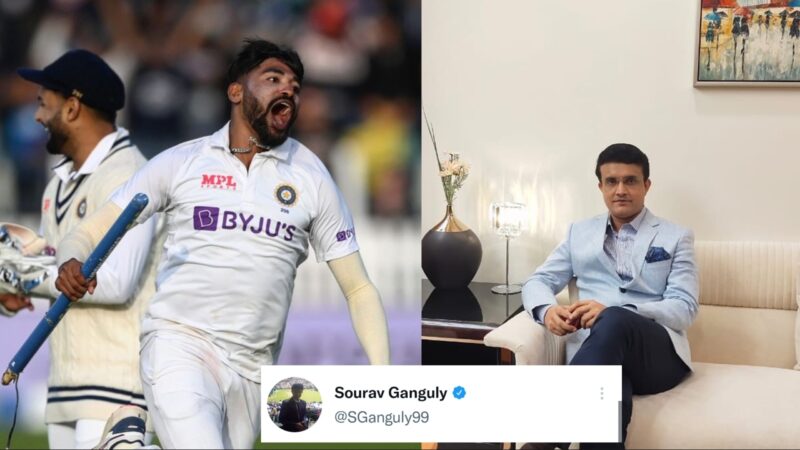 The Indian cricket team scripted an iconic win over England in the 2nd Test match, which saw every result possible. But in the end, an excellent bowling display from the Indian bowling department lead to the fall of England’s 2nd inning in just the last two sessions of the last day.

Many sports journalists and cricket experts quoted this as a historic win for India. The Board of Control for Cricket in India (BCCI)’s president, Sourav Ganguly also commented on Team India’s victory through his Twitter handle.

Sourav Ganguly shared on his Twitter handle, “Fantastic win for India, what character and guts from the team, each and every one, such a pleasure to watch it from so close”

Below that tweet, many Indian cricket fans and Sourav Ganguly fans commented that India’s win made them remember the iconic moment of Sourav Ganguly flaunting the Indian Jersey on the Lord’s balcony.

Regarding the match, Team India ensured the win on the last day of the game with eight overs remaining, bowling out England for just 120 runs in the 2nd inning.

England skipper Joe Root asked the Indian team to bat first after winning the toss. India put up 364 runs on the board, with KL Rahul scoring the highest 129 runs. Rohit Sharma was unlucky and missed out on his other century in Test cricket. James Anderson got most, five wickets for England.

England’s 1st inning didn’t start well as they lost two wickets for 23 runs and three down at the end of 2nd day’s play for 119 runs. However, the next England came back strong thanks to Joe Root’s 180 runs. England finished with 391 runs, taking a lead of 27 runs.

Team India’s 2nd inning was rescued by Mohammed Shami and Jasprit Bumrah, who scored 56 and 34 unbeaten runs, respectively. Indian bowlers started well in England’s 2nd inning, dismissing two batters for just one run. England tried their best to save the match, but India’s bowling was too good, and England got all-out for 120 runs, giving India a huge 151 runs win.