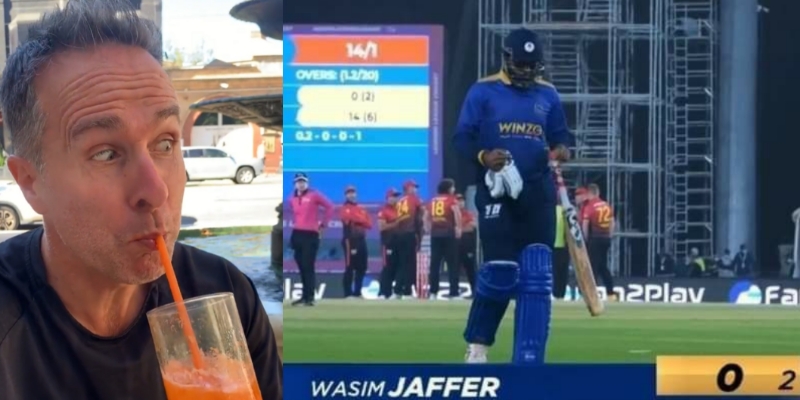 Michael Vaughan and Wasim Jaffer are two hilarious characters on social media. They often engage in funny banter, much to the amusement of the fans. Recently, Vaughan got another chance to troll Jaffer. The Indian opener did not do well in the ongoing Legends League Cricket game and hence, had to be subject to a troll by the former English skipper. In this article, we take a look as Michael Vaughan teases Wasim Jaffer after he scores a duck in Legends League Cricket game against World Giants.

The Legends League Cricket witnessed an interesting game on Saturday. Indian Maharajas, led by Mohammed Kaif made 209 runs in the first innings. It was mainly possible due to Naman Ojha’s brilliant knock of 140 from 69 balls. With the ball, the Indians seemed well in control of the game. However, in the end, Imran Tahir scored 52 runs from 19 deliveries to win the game for the World Giants. No one had seen this kind of batting show by Tahir before. Hence, the Maharajas were left disappointed.

Jaffer, who opened the batting, got out on zero. Ryan Sidebottom picked his wicket. Michael Vaughan used this to throw a sarcastic jibe at Jaffer. Here is what he said:

Hope you are ok @WasimJaffer14 😜😜😜 pic.twitter.com/1Akl8quxnK

Now, Twitter is looking forward to how Wasim Jaffer would reply to the post. Usually, Jaffer finds his own way to answer Vaughan in a hilarious manner. Hence, his reply is keenly awaited.

Meanwhile, the first edition of the Legends League Cricket is poised nicely. All three teams have won one game each and the next round of clashes will decide the finalists.