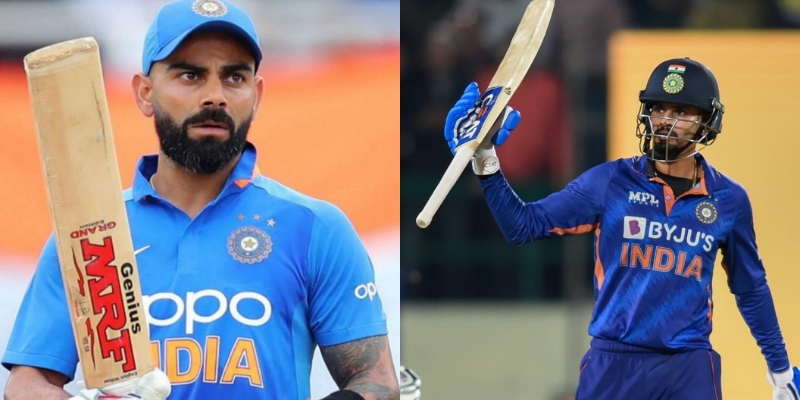 Indian cricket team beat the Sri Lankan team by six wickets in the third and final T20 International on Sunday to clean sweep the three-match series 3-0. Sri Lankan bowlers once again struggled to get India’s star batsman Shreyas Iyer, who remained not out throughout the series.

Indian cricket team went into the 3rd T20I having already won the series, winning the first 2 matches. Thus making as much as 4 changes into the team.

In the match, Shreyas Iyer once again scored unbeaten 73 runs to guide India to victory. With that, Shreyas Iyer has now passed Virat Kohli’s big record with his performance. Iyer has now become the highest run-scorer for India in a three-match T20I series. He has now scored a total of 204 runs in three innings in the series.

Back in 2016, Virat Kohli had scored 199 runs in a three-match T20I series against Australia. He had come close to that score when he scored 183 runs in a series against West Indies in the year 2019.

Shreyas Iyer got off to a great start in the series, scoring a quickfire 57 runs of 28 balls. In the second match, he scored an unbeaten 74 off 44 balls, which is also his highest score in the series. In the third match, Iyer played an unbeaten knock of 73 in 45 balls.

Shreyas Iyer’s brilliant knock meant that India had no problem at all chasing the target of 147 runs as India registered a clean sweep over the neighbours. And thus, also equalled Afghanistan’s world record of winning 12 consecutive T20I matches.

Sri Lanka posted a challenging score of 146 for five in 20 overs, thanks to a brilliant half-century from captain Dasun Shanaka (74 not out) and an unbeaten 86 runs partnership in 7.5 overs for the sixth wicket with Chamika Karunaratne (12 not out).

But India still had no problem is chasing down the target of 147 runs by scoring 148 for four in 16.5 overs. Shreyas Iyer had been the hero of the entire series for India, and once again showcased his talent. He was also awarded with the Man of the Series award.