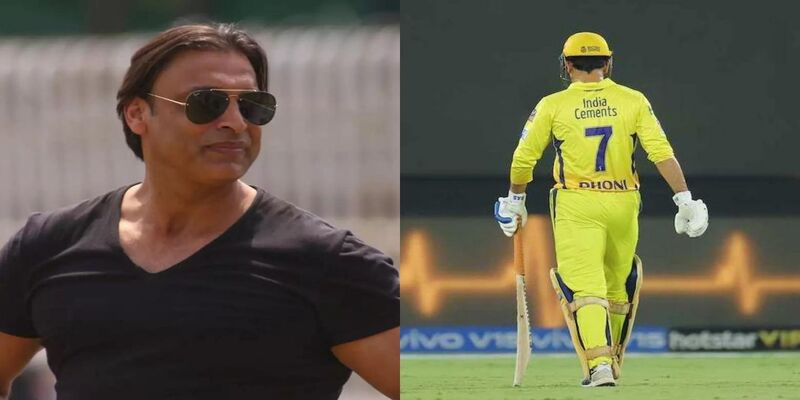 On Thursday, the defending champion, Chennai Super Kings, faced a humiliating defeat at the hands of arch rivals, Mumbai Indians. As a result, they are out of the competition, and IPL 2022 will see a new champion. The whole CSK batting line-up failed and they got all out for 97. But the only survivor for the Yellow Army was the skipper, MS Dhoni. He was unbeaten on 36 off 33 balls and stayed till the very end.

With this loss, CSK became the only second team to get eliminated from this season after MI. MSD has shown some good form with the bat. He has scored 199 runs in 12 matches at an average and strike rate of 39.80 and 130 respectively. Former Pakistani speedster Shoaib Akhtar reckons that MSD can carry on as a player next season for Chennai. But if not, he can do the job of mentor or head coach of the team.

During an interaction with Sportskeeda, Akhtar said that MS Dhoni is still doing a great job as an individual performer. He can continue to play and lead the team next year as well. However, he pointed out that if MSD doesn’t want to play as a player, he can also carry on as the mentor or head coach for the team. He added, “It all depends on Dhoni. He is an asset. Either he is in the team or with the team.”

The Yellow Army has started the season with four losses, and the talking point was the change in captaincy before the tournament began. Highlighting the captaincy matter, former pacer said that it looked like the franchise was not serious and no one knew why they appointed Jadeja as the captain, but now they have to bounce back next season. However, he also said that no one knows what MSD is thinking and that he might announce his retirement from all forms. The former Indian skipper retired from international cricket on August 15, 2022. He shared a post on his Instagram handle with a classic Bollywood song with it.

Akhtar added that the CSK skipper might also retire when he likes because no one can predict what he is thinking and what is happening in his mind because he is that kind of person. If he wants, he will do that right away with another Bollywood song. The former pacer concluded, “To be honest, the time has come for a few players. There are no ifs and buts in franchise cricket.”