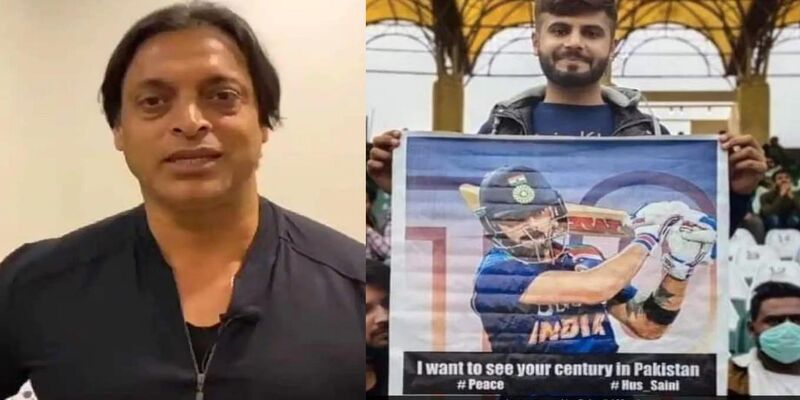 Pakistan Super League has reached its final stage with four teams having qualified for the playoffs. And T20 is always exciting for the fans, whether it is in any part of the world. But apart from the live cricket, something else caught the eyes of millions during a PSL match. A fan was spotted at the Gaddafi Stadium in Lahore with a poster in hand. And the poster was not of any Pakistani players; it was of former Indian skipper Virat Kohli.

Virat Kohli is a brand both on and off the field. He is known for his style, attitude, and aggression. And that’s the reason he is a worldwide superstar; fans across the world love him. And many young cricketers also admire him and his batting style. And the world saw his other fan holding his poster during a PSL match.

Former Pakistan speedster Shoaib Akhtar also praised that Pakistani boy on his Twitter handle. Akhtar tweeted the photo of that boy and said, “Someone spreading love at the Gadaffi Stadium.” He also expressed that the love and peace don’t have boundaries.

The fan was holding a poster of Kohli in the Indian jersey. And that poster had some lines for the former Indian skipper. As it reads, “I want to see your century in Pakistan.” The picture of that boy went viral on social media and was shared world-wide.

The former Indian captain has been going through a rough patch for the past two years.Virat Kohli scored his last international century in November 2019 at Eden Gardens, Kolkata, against Bangladesh. Since then, he has not been able to score a single century in any format of the game.

However, the Indian batter has made some significant scores and crossed half-centuries around 32 times, maintaining a decent average of 40+ across the format. This year as well, he has already managed four 50+ scores across the formats.

The young boy requested him to play in Pakistan and score a century against them through the poster. However, India and Pakistan didn’t play any kind of bilateral series from 2012–13 because of the 9/11 attack. And as a fan, we can only expect things to get better and both nations to start playing regularly.