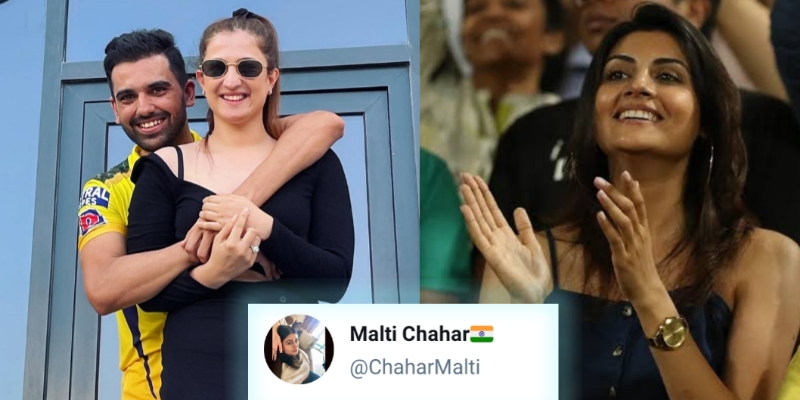 Malti Chahar posted a hilarious tweet on her official Twitter handle, reacting to Deepak Chahar proposing to his girlfriend Jaya at the Dubai International Cricket Stadium after the match between the Chennai Super Kings and the Punjab Kings in the 2021 edition of the Indian Premier League.

Looking at the viral video of Deepak Chahar, some fans believed that he had got engaged to a foreigner. However, his sister Malti Chahar revealed that her name is Jaya and she is from India only. Malti added that Jaya is from Delhi. She had been to Dubai with Deepak. It is pertinent to note that Bollywood Life had reported about this back on August 31.

“Reportedly, the duo is very serious about one another and are even planning on getting married. According to a source close to Bollywood Life, the pair is planning to do a roka very soon and Jaya may also go to Dubai to be with Deepak. Deepak apparently has also has introduced her to the entire cricket team,” an article in Zoom TV reads.

“And my brother is taken @deepak_chahar9 Lo mil gayi bhabhi . She is Jaya Bharadwaj and she isn’t a foreigner…Delhi Ki ladki h. God bless you both. #engagement #love.”

And my brother is taken❤️💍 @deepak_chahar9
Lo mil gayi bhabhi😁. She is Jaya Bharadwaj and she isn’t a foreigner…Delhi Ki ladki h.
God bless you both😘#engagement #love pic.twitter.com/DbMMxKwIJ7

Deepak Chahar will try to end this memorable IPL season in a grand style. The best way he can do it is by helping CSK become the champions. CSK are likely to take on Delhi Capitals in Qualifier 1.