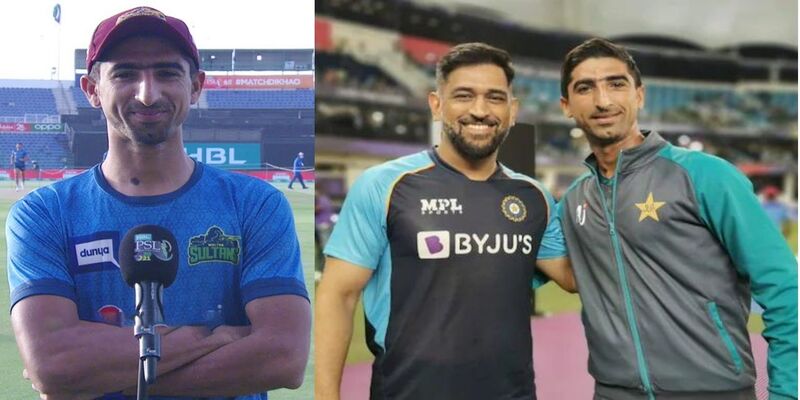 Shahnawaz Dahani is another young emerging pacer from the land of Pakistan. And he has shown in the ongoing PSL why he is considered one of the best young talents in Pakistan. The young pacer is representing the defending champions, Multan Sultans, and it was his performance of 3-19 against Lahore Qalandars that helped Multan reach the finals of PSL 2022.

Dahani is an entertaining cricketer who is known for his rear pace and on-field wicket celebrations. And after having such a good performance in the Qualifier, the 23-year-old opened up about his meeting with MS Dhoni in the T20I World Cup 2021. In an interview with Cricket Pakistan, he revealed what MS Dhoni suggested for his cricketing career. The pacer said that the former Indian skipper’s level is very high and he is one of my idols. He added that it was his dream to meet the legend and that he would never forget that moment. The pacer also said that MSD also told him that every cricketer has some good and bad days in cricket, “but you have to embrace it and stay dedicated to the game you love the most.”

My wish is to meet Jofra Archer – Shahnawaz Dahani

The Pakistan pacer also spoke about how he used to watch the Kiwi pacer, Shane Bond, in his early days. He said that he used to follow Bond because he was too fast and wanted to become like him. But once the New Zealander retired, Dahani started to follow English pacer Jofra Archer. He added that it is his wish to meet Archer once in his life.

Dahani also praised Multan’s skipper, Mohmmad Rizwan, for his captaincy and how calm he is under pressure. The pacer said that Rizwan gives the player freedom to execute the plans and bowl according to their requirements, which gives them the confidence to perform on the big stage.

Multan Sultans have already advanced to the finals and will face either Lahore or Islamabad for the PSL Trophy on February 27.