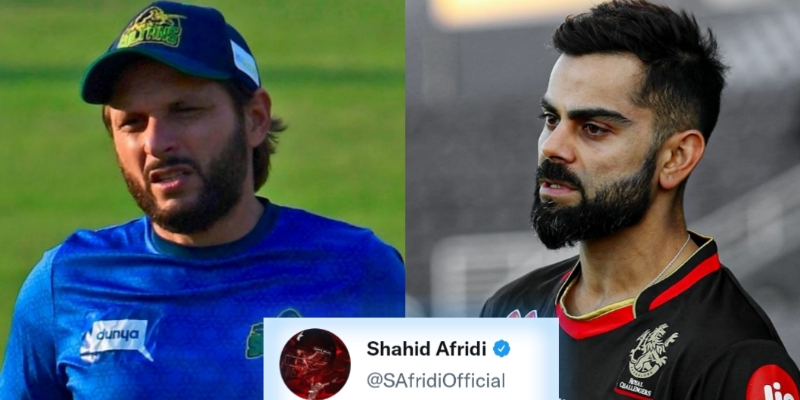 Former Pakistan captain Shahid Afridi recently posted a tweet reacting to the batting practice of the Royal Challengers Bangalore captain Virat Kohli ahead of his team’s battle against the Sunrisers HyderabadS in the 2021 edition of the Indian Premier League tonight.

Kohli’s team has already qualified for the playoffs, but they need to win their remaining two matches to keep their chances alive of a Top 2 finish. To ensure that he is able to play at his best against the Sunrisers Hyderabad, the Royal Challengers Bangalore captain Virat Kohli sweated hard in the nets yesterday night. He uploaded a video from his practice session.

Soon after, the former Pakistan cricket team captain Shahid Afridi reacted to the video. He quoted the tweet from Virat Kohli and wrote:

I feel that my innings as a cricketer is almost over now: Shahid Afridi

While the Royal Challengers Bangalore are set to take on the Sunrisers Hyderabad in the 2021 edition of the Indian Premier League, Shahid Afridi had recently commented that the innings of his life as a cricketer is nearing its end. Having made a return from retirement multiple times, Shahid has stayed from the international arena for quite some time. But he had been playing in the Pakistan Super League. He recently associated himself with Nepal’s Everest Premier League.

In a recent interview with Cricket Pakistan, Shahid had said: “I am busy with my foundation work. Also, I have been observing my body. It is not supporting me anymore. I feel that my innings as a cricketer is almost over now. The second innings is a big one. So hopefully that wouldn’t end soon.“