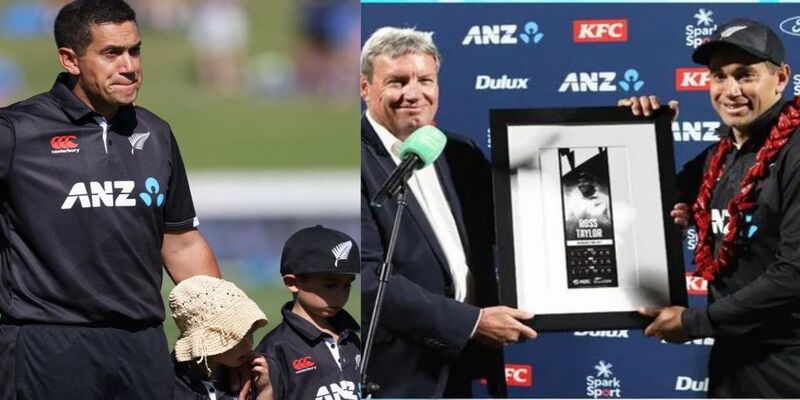 The Kiwi legend, Ross Taylor bids adieu to the cricketing world on Monday after the third and final match against Netherlands. Taylor played his last international match at Seddon Park, Hamilton.

New Zealand paid him a special tribute by organizing a presentation to thank him for his 16-year contribution to cricket. Notably, this was also the 450th international appearance for him in this game of sports for the country. A career that has seen many highs and lows. A career that has many good and bad memories attached to it. That includes getting dropped from the team to hitting the winning runs in the 2021 WTC finals against India at Lord’s. Taylor scored 14 runs off of 16 balls in his final innings of his career.

Ross Taylor got emotional and thanked his teammates after the match and shared his last words with the teammates. He said that he will always be there for the players whenever they need him. Taylor further said, “I’ll miss you, boys.”

The opposition team also showed their respect towards the Kiwi legend. Earlier in the match, when Taylor entered the crease to bat, the Netherlands welcomed him with a guard of honor. All the spectators on the ground also gave him a standing ovation in order to thank him.

Ross Taylor made his debut way back in 2006 in One-Day International cricket against West Indies at Napier. In the same year, he also made his red-ball debut against South Africa in Johannesburg. He has represented New Zealand in 112 Tests, 236 ODIs, and 102 T20Is. He is the leading run-scorer for his country in Tests and ODIs. Taylor has scored 7683 Test runs, 8607 ODI runs and 1560 T20I runs in his career, including 40 international centuries.

Further thanking his family, he said that they had supported him unconditionally throughout his life. And it’s been a fantastic 16-year long journey. Before the match, during the National Anthem, he was joined by his wife and kids. And it brought tears to his eyes.