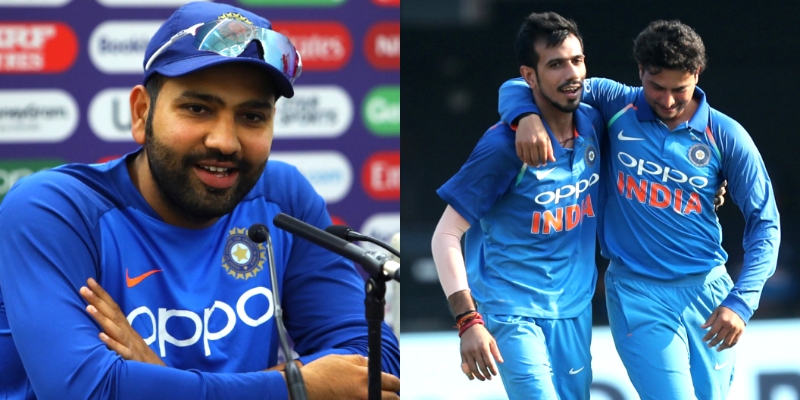 Indian cricket team’s captain Rohit Sharma has confirmed that India is set to witness both Kuldeep Yadav and Yuzvendra Chahal play together again in the upcoming ODI series against West Indies.

The number of wrist spinners, added experience, are very less in number in India to be frank. The pair of Yuzvendra Chahal and Kuldeep Yadav is two of whom who meets the criteria but have been in an out of team.

Once, both of them were regular members of Indian cricket team and was one of the pair in the world of cricket and was famously known as ‘Kulcha’, a name given to the duo by fans.

The duo to struggled to perform lately and lost their places in the team, especially Kuldeep Yadav. But, after a long time, the duo is going to be seen once again donning the blue jersey of the Indian team.

The duo would use to be so good and important for India that when it was announced the Kulcha are coming back together, fans expressed their joy at the decision. And India’s captain Rohit Sharma has also confirmed during the press conference that in the first ODI against West Indies, the pair will once again be seen showing their flair on the ground.

Yuzvendra Chahal and Kuldeep Yadav has not played cricket together for a big chunk of time now. The duo would normally be first choice names in the team selection and both the duo have found it hard to make it back to the team.

Kuldeep Yadav last featured for India in the Sri Lanka in July 2021, while Yuzvendra Chahal most recently featured in a disappointing series defeat against South Africa.

With Chahal alongside him, the duo would use to wreck havoc on the opposition team, and in such a situation, Rohit Sharma is ready to show trust in them.

Rohit Sharma stated in the pre-match press conference that Kuldeep and Chahal has done very well for India and would use to have a huge impact on the team, but were dropped from the team due to combination related issues and is definitely in his mind to bring them back together.

Rohit Sharma said, "Yuzvendra Chahal and Kuldeep Yadav have been great performers for India in the past, they've created great impact. They were left out due to different combinations we wanted, but it's certainly on my mind to get them back together".

While talking about Kuldeep Yadav, Rohit Sharma stated that the plan is to bring Kuldeep slowly into the team and give him some time and not put pressure on him with higher expectations.

Team India, under the leadership of Rohit Sharma as full time captain, is set to take on the Kieron Pollard led West Indies team in a 3 match ODIs series beginning tomorrow, the 6th of February in Ahemdabad.