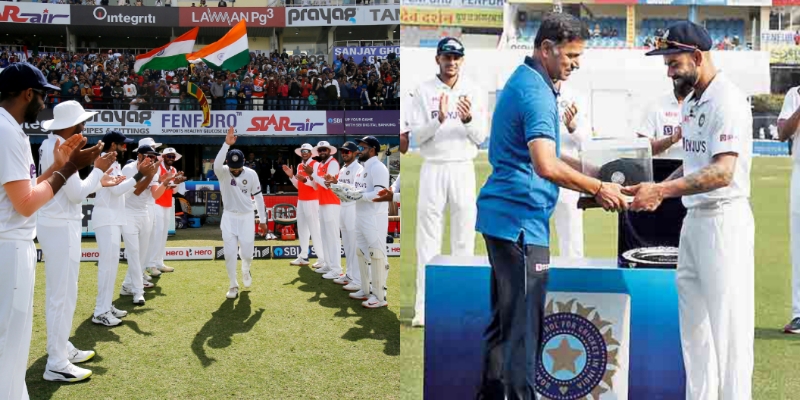 The 1st Test match between India and Sri Lanka being played in Mohali, is a very special one for Virat Kohli, the former captain of Team India. This is the 100th Test match of Virat’s glorious career and to make it special, Team India adopted a special arrangements. When the Indian team came out to field after the end of their inning, Virat Kohli was given a guard of honor by the Indian cricket team players.

The first of the scheduled 2 match Test series between India and Sri Lanka is currently ongoing in Mohali’s Punjab Cricket Association IS Bindi Stadium.

Team India declared its first inning in the match for the score of 574. Shortly after this, Team India came out for fielding, and as when Team India was taking on to the field, all of the Indian team players stood face to face and gave Guard of Honour to Virat Kohli.

It is to be noted that the Indian team had also honored Virat before the start of the Test match. Coach Rahul Dravid handed over a special cap to Virat, in which his name and Test number were inlaid. During this, Virat Kohli’s wife Anushka Sharma was also present on the ground with him.

Virat Kohli has become the 12th Indian cricketer to play 100 matches in Test cricket, while he has become the 71st cricketer in world cricket. Kohli had said that it is a matter of honour and fulfillment of dreams for him.

Virat Kohli scored 45 runs in the first innings of the Mohali Test, missing out his fifty by just 5 runs. He also completed 8000 runs of his Test career. Kohli has not scored a century for the last two and a half years, and everyone expected that Virat Kohli would definitely be able to complete his century drought on this special occasion. But he got clean bowled on the score of 45 in the first innings.