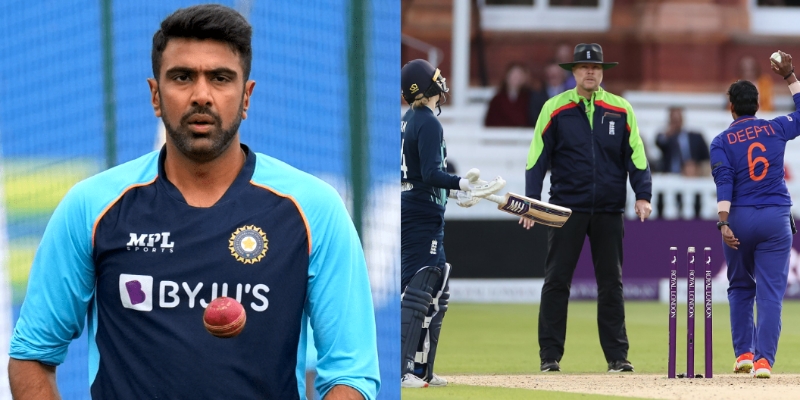 India’s Deepti Sharma’s run out in the third ODI against England is being discussed a lot at this time. England’s cricketers and fans are calling it wrong, while India’s fans and cricketers are calling it justified as per the rules and is supporting Deepti.

Deepti Sharma gave India victory by running out the non-striker batter at the non-striker end without bowling the ball, which was called Mankading before new rules have allowed it to be included as run out.

Meanwhile, following the incident, the Indian men’s cricket team bowler Ravichandran Ashwin is currently trending on social media as Deepti’s run out has caused people to remember what Ashwin had done a sometimes back in the IPL.

Looking at the bigger picture, the England team had scored 153 runs while chasing the target at one time. It looked like the last pair would give England the win in the match which was a very special one for the Indian team.

This dismissal was similar to what Ashwin had done to Jos Buttler during the IPL 2021. Following the incident in England, Ashwin started trending a lot on Twitter. Everyone started comparing Deepti Sharma with Ravichandran Ashwin.

However, Ashwin did not like this thing. He said that Deepti Sharma should be talked about here. Ashwin tweeted saying, “Why are you trending Ashwin? Tonight is about another bowling hero @Deepti_Sharma06.”

Why the hell are you trending Ashwin? Tonight is about another bowling hero @Deepti_Sharma06 🤩👏

Talking about the match, it was a special match for the Indian team to win as it was the farewell match to the Indian veteran bowler Jhulan Goswami. Batting first, the Indian batters failed to put up a big total on the board as they were dismissed for 169 runs. Smriti Mandhana and Deepti Sharma both scored half-centuries.

However, the Indian bowlers didn’t made it easy for the England batter either. The England team kept on losing wicket at regular intervals. The England team were down to 7 wickets for 65 runs. However thereafter, Charlotte Dean and Amy built a decent partnership before the latter was dismissed.

However, the game was more tighten as last wicket of Charlotte Dean and Freya Davis built a great partnership and were taking the match to England’s favour. However, before they could finish the match, Deepti run out Dean at the non-striker end for leaving the crease before the ball was bowled.