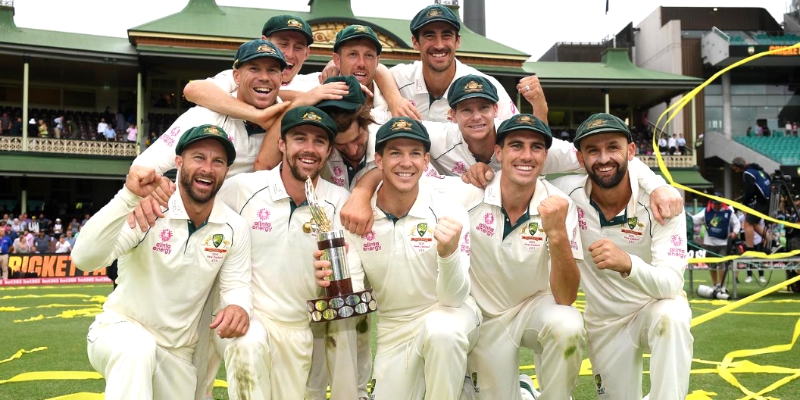 The Australian cricket team is going all guns blazing for the upcoming Test series in Pakistan, after a huge gap of 24 years, as the Australian Senior Selection Committee has named a full-strength 18 member squad for the series.

The last time that the Australian men’s cricket team visited Pakistan, was way back in between October, November 1998 when Mark Taylor led Australia played Pakistan in 3 Test matches which Australia won 1-0.

And it’s after the big gap of 24 years that Australia is visiting Pakistan again. There were rumours that some senior members may opt out of the series due to security concerns, but the Cricket Australia (CA) has today announced a full-strength 18 member squad for the series.

As usual, Pat Cummins will lead in team and Steve Smith will be serving as his deputy. Scott Boland, after impressing in the recently concluded Ashes, has retained his place in the team, and will partner the likes of Mitchell Starc, Josh Hazlewood and Pat Cummins with the ball.

Rising star Cameron Green has also retained his spot after impressing everyone, while Mitchell Swepson and Nathan Lyon will be leading the spin bowling charge.

In the batting department, David Warner, Marnus Labuschagne, Travis Head, Usman Khawaja and Alex Carey have all stayed put to their place in the team.

Our 18-player Test squad for the Qantas tour of Pakistan! 🔒

The Test playing contingent and staff are due to depart for Pakistan later this month while white ball players, to be announced separately, will join mid-tour for the ODI and T20I matches. pic.twitter.com/7RM0HwKygq

There are still talks that some players, even after being named in the squad, may opt to not tour Pakistan and Todd Greenberg, the Chief of Cricket Australia has confirmed that Cricket Australia will full to the players who may still opt out of the Pakistan tour.

As pre-discussed, the Australian team will complete their isolation in Australia itself and then will leave for Pakistan and expected to reach by the 27th February, where they will serve a 1 day isolation before hitting the training grounds.

The Australia tour of Pakistan begins on the 4th of March with the first Test match in Rawalpindi. The series will consist of 3 Test matches, as many ODIs and only T20I.

“He is being painted as a monster” – Adam Gilchrist speaks on Justin Langer’s resignation as Australia Head Coach
James Anderson, Stuart Broad left out as England announces squad for West Indies Test series
To Top