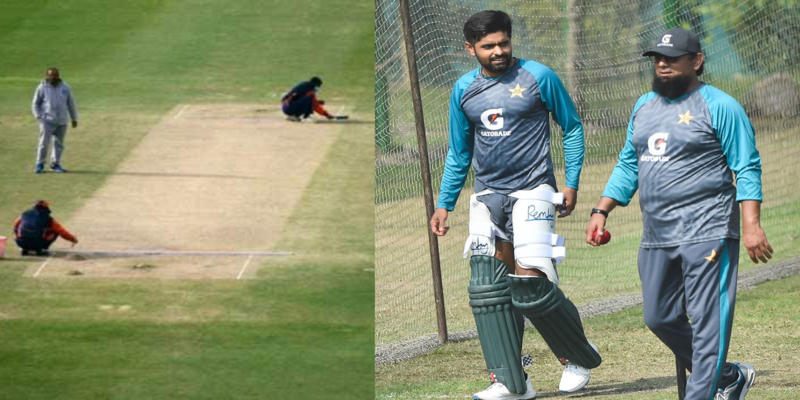 The hype of the first test match between Australia and Pakistan ended with a dead pitch at Rawalpindi. And the first match ended with an expected draw after five days of cricket.. Australia’s historic tour of Pakistan is underway with the test series. And this is the first time since 1998 that the Aussies are playing any kind of bilateral series here in Pakistan. But all went in vain as the world saw a pitch which didn’t offer anything for the bowlers of the visitors. And now, as per Cricket Pakistan, claiming that it was the decision of a Pakistani think-tank that asked the PCB to make such a dead pitch for the first test match.

The first test match of the Benaud-Qadir Trophy was a run feast for the batsmen. A total of 1187 runs were scored in the first test match and only 14 wickets fell during the course of five days. And as per the report of Cricket Pakistan, Pakistan’s think tank, which included head coach Saqlain Mushtaq and skipper Babar Azam, asked the PCB to make a dead pitch due to a fear of loss.

However, the traditional pitch at Rawalpindi has a rich history of assistance to the bowlers. Last year, the Men in Green won a test match by 95 runs against South Africa, here at the very same ground. Pakistani speedster Hasan Ali took 10 wickets in that match. For South Africa, it was Anrich Nortje and spinner George Linde who took 5 wickets each. But the last match was a nightmare for the bowlers from both sides as bowlers suffered to take wickets on this pitch.

However, as per some media sources, the home team is not having an expert who can complete the pitch as per requirement. However, given that Pakistani spinners took a few wickets in the first test, the pitch in the second test is likely to be slow and turn wicket.Both teams had already reached Karachi on Wednesday. And from today on wards, they will start their preparations. Both teams will play the second test match between March 12 and 16 at the National Stadium, Karachi.