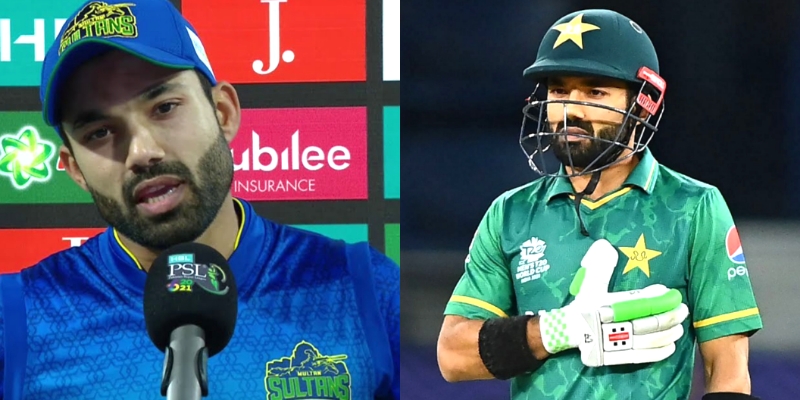 Wicketkeeper batsman Mohammad Rizwan has become a well established name in the world of cricket after consistent performance for the Pakistan cricket team in the last couple of years.

Rizwan is also considered the current best T20I player of the Pakistan cricket team. He right-hand batsman was the highest run scorer in T20I format last year with 1326 runs from 29 matches.

Mohammad Rizwan has become a known face in Pakistan cricket scenes. He displayed heroic performance in the T20 World Cup 2021 and guided Pakistan to the semi-final of the event, and also played a crucial role in beating India.

Most recently, Mohammad Rizwan spoke with the ESPNcricinfo team in a special interview where he disclosed the toughest bowler that he has faced in his career.

During the interview, he revealed that Australia’s Josh Hazlewood is the toughest bowler that he has faced his career so far, referring to the T20 World Cup 2021 semi-final clash against Australia.

He stated that he will always remember the Australia match and Josh Hazlewood is the toughest bowler that he has faced. “I will always remember the Australian match, Josh Hazlewood is the toughest bowler I have faced, I find him difficult. Apart from that, the pitch and the condition was also against us,” added Rizwan.

Talking of Josh Hazlewood, he is Australia’s one of the most important bolwer in the arsenal bowling attack that Australia has. He had a tremendous 2021, first won the IPL trophy with the Chennai Super Kings and then the T20 World Cup 2021.

As for Mohammad Rizwan, he is currently participating in the ongoing Pakistan Super League, where he is playing for the Multan Sultan, who are the defending champions of the competition. In their first match of the competition, he scored 52 runs not out and helped his team to victory in the match against Karachi Kings.