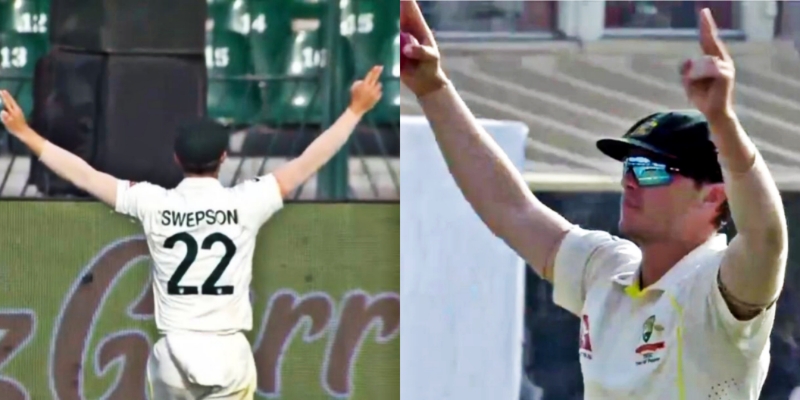 Australian cricketer Mitchell Swepson showcased his own version of Shaheen Afridi‘s celebration after the leg-spin bowler took a good catch of Shaheen to dismiss him on the 5th day of the decider match.

Australia defeated Pakistan by 115 runs in the third and final Test match played in Lahore to win the three-match Test series 1–0. Australian team was touring Pakistan after a massive gap of 24 years, thus, defeating a team like Pakistan on their home soil is commendable job by the Aussies.

In the match, Australia’s leg-spin bowler Mitchell Swepson may not have made headlines with his bowling, but during the fielding, there was a moment when he did something that he became the subject of interest on social media.

During the 5th day’s play, when Australia was cruising towards victory, Mitchell Swepson took a wonderful catch to dismiss Shaheen Afridi, but that’s that what is making the headlines, it is the moment when he celebrated the catch in Shaheen Afridi’s style is hitting the internet.

After completing Shaheen’s catch, Swepson celebrated by raising his hand in Shaheen’s style, as because of which the video became viral on social media. Afridi was the ninth wicket to fall in Pakistan’s second innings and Australia did not have to wait long to take the last wicket, and eventually Australia won the series by winning the final Test by 115 runs.