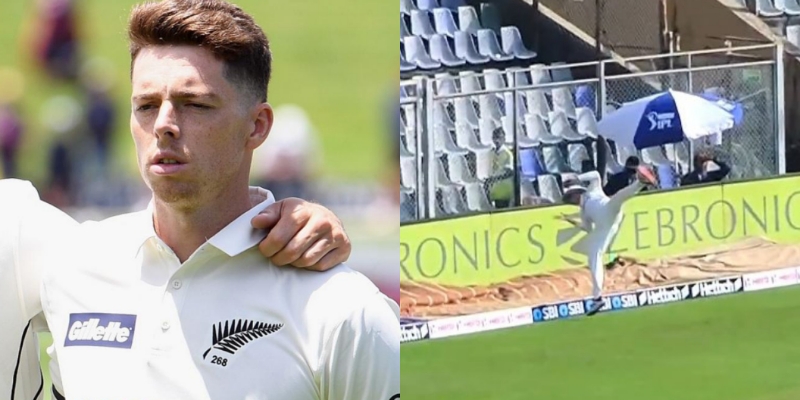 New Zealand cricket team cricketer and all-rounder Mitchell Santner, who did not even play the match, was awarded with Indian Rupees (INR) 1 Lakh after the conclusion of the 2nd Test match in Wankhede.

The above mentioned incident has led to many fans being confused as to why the New Zealand all-rounder was awarded the amount, while he was not even in New Zealand’s playing XI.

Actually, the Kiwi all-rounder pulled of a great boundary line save (almost a catch) during the Indian team’s 1st inning in the match. For that reason, Mitchell Santner was awarded with the ‘Best Save of the Match’ award that carries an amount of INR 1 Lakh Rupees.

Terrific work by Mitchell Santner, he saved 5 runs for his team. pic.twitter.com/KUcmE0SGbB

It was during the 46th over of the Indian cricket team’s first inning that a flighted ball from Will Summervile was hit hard by Shreyas Iyer, with a six written on it, however, substitute fielder Mitchell Santner was there on the boundary line.

Santner leaped as high as he can and got the ball into his clutches, but he saw that he may land on the boundary line, and thus, opted to throw the ball back inside and saved a quite few runs for Kiwis.

The New Zealander received a lot of praise from his teammates and the crowd in attendance for the match.

Talking about the match, New Zealand suffered a massive 372 runs defeat against the mighty Indians in the 2nd Test match in Mumbai’s Wankhede Stadium.

Even though New Zealand’s Ajaz Patel stole the show with his 10 wickets in an inning, it was an all-round performance from the Indian team that took them to the massive victory.

Whether it is with the bat or the ball, Indian team was at top all the time during the duration of the match. First, it was Mayank Agarwal with the bat, as the Karnataka born batsman scored 150 runs in the 1st inning and then added another half-century in the 2nd inning.

Ravichandran Ashwin was the star with the ball throughout the match as the off-spin bowler bagged 8 wickets in the match.

Dinesh Karthik Wishes Shikhar Dhawan On His Birthday With A Hilarious Post
Watch: David Warner Survives A Runout Under Hilarious Circumstances
To Top