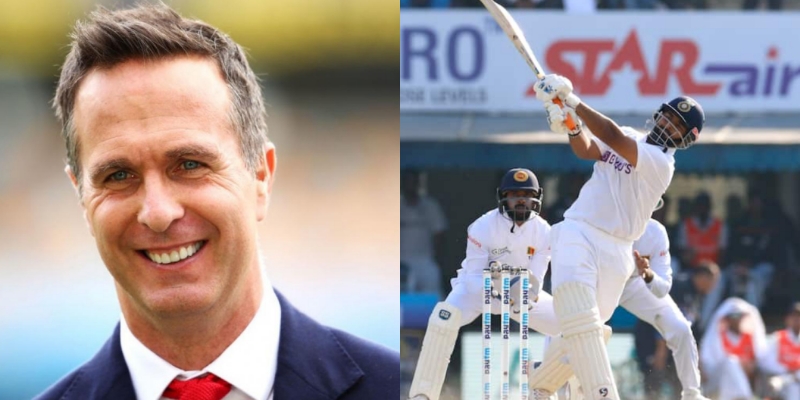 Former England captain Michael Vaughan has heaped praise on Rishabh Pant for his scintillating innings in the first match of the two-match Test series against Sri Lanka in Mohali on Friday.

The Indian cricket team is playing the first of the scheduled 2 match Test series in the Mohali’s Punjab Cricket Association IS Bindi Stadium. At the end of day 1’s play, Team India scored 357 runs for the loss of 6 wickets, but unfortunately, Indian wicketkeeper batsman Rishabh Pant missed out on his century by just 4 runs.

Rishabh Pant was dismissed for a personal score of 96 runs and missed his fifth Test century by just four runs. But despite this, former England captain Michael Vaughan has described him as the “Greatest Modern Day Entertainer”. Pant hit 4 sixes during his firing inning.

Rishabh Pant got into the T20 mood after the dismissal of Shreyas Iyer on the first day. Pant, who completed his first 50 runs in 73 balls, scored 46 runs in the next 24 balls.

Rishabh came close to breaking former India batsman Dhoni’s record for the fastest century as a wicket-keeper by hitting four sixes and nine fours in his innings. He was dismissed for 96 in 97 balls by Suranga Lakmal towards the last hour of the first day.

The former England skipper Vaughan tweeted before Pant’s dismissal, “Absolutely love watching @RishabhPant17 !! A player who you can’t love .. don’t want to miss a ball he faces .. no idea what’s going on his head .. but it’s always a must watch .. I reckon he is the greatest modern day player entertainer.”

Absolutely love watching @RishabhPant17 !! A player who you can’t love .. don’t want to miss a ball he faces .. no idea what’s going on his head .. but it’s always a must watch .. I reckon he is the greatest modern day player entertainer ., #INDvSL

This was the fourth time that Rishabh Pant fell pray to the Nervous 90s, just 2 less than former Indian batsman and the greatest of all-time, Sachin Tendulkar.

Talking about the match, Team India finished of the Day 1’s play with 357 runs on the board at the time of stumps. Both Rohit Sharma and Mayank Agarwal gave India a solid start, adding 29 and 33 runs respectively.

In a very special match for him, the 100th Test match for Virat Kohli, the batsman missed out on his fifty by just 5 runs. Hanuma Vihari added 58 runs, while Shreyas Iyer was dismissed for 27 runs. Ravindra Jadeja and Ravichandran Ashwin are currently at the crease and will resume Day 2’s play.