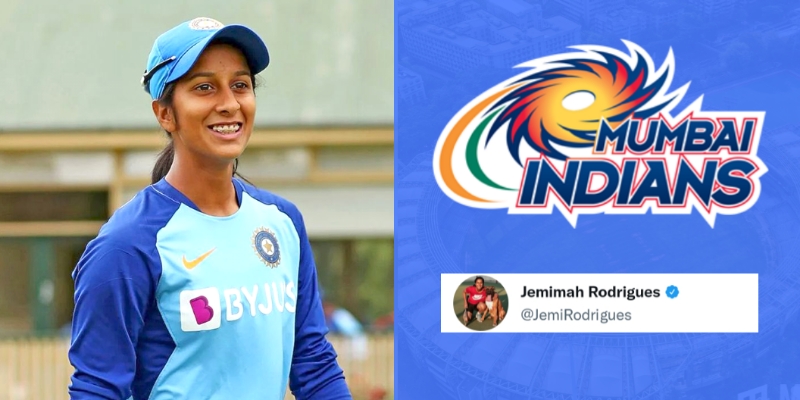 Indian women’s cricket team’s star cricketer Jemimah Rodrigues celebrated her 22nd Birthday on the 5th of September. Meanwhile, when IPL franchise Mumbai Indians wished her on her special day, she had a special message for the team.

Jemimah Rodrigues is one of the most recognised player of the Indian women’s cricket team, not only because of her performance but also because of her off the field notorious behaviour.

Jemimah is one of the most fun loving member of the Indian women’s cricket team. She has a great bonding with the Indian team’s members.

She has played a crucial role in helping India to victory a several times. She was born on the 5th of September in the year 2000 in Mumbai. She received lots of wishes from the cricket fraternity on her special day, that also included one from her local IPL franchise Mumbai Indians.

The Mumbai Indians social media took to their social media handle to wish the Indian batter a happy birthday. But, on the same post, Jemimah had a special message for the Mumbai franchise.

She replied below the post, “Thank you! You guys better pick me up for the Womens IPL… just saying.”

Thank you! You guys better pick me up for the Womens IPL… just saying 😌💙

It is no surprise to everyone that the Women’s IPL is currently in the plans for the 2023 season. Even the BCCI President Sourav Ganguly has often talked about it and has confirmed that it’s not far away.

Over the last couple of months, there has several experts and even the Indian women’s cricketers as well as the overseas cricketers who have urged the BCCI to introduce the Women’s IPL.

“If I was an England fan” – Wasim Jaffer gives a befitting reply to England’s Barmy Army for comparing Ashes series with India vs Pakistan
Indian cricketer KL Rahul to tie knot with girlfriend Athiya Shetty: Report
To Top