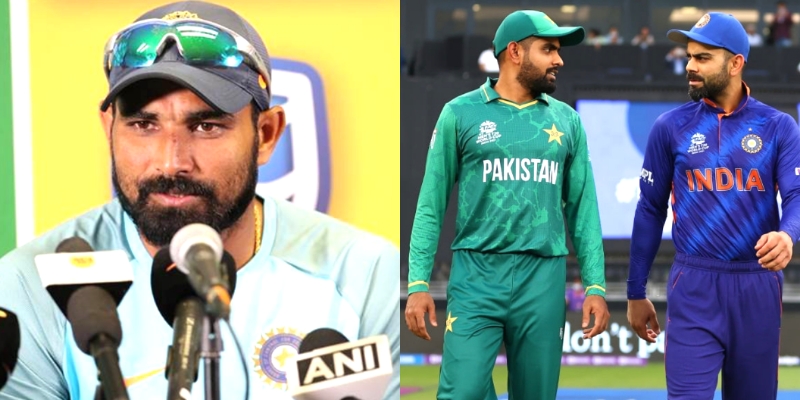 Indian cricket team’s one of the top pacer Mohammed Shami has spoken on the most talked about debate of Virat Kohli vs Babar Azam, as to who is better among the two.

Virat Kohli overs the years worked on and improved on and currently stands at a point where he is considered one of the best ever to have graced the game of cricket.

Whereas, it is just the beginning for Pakistan skipper Babar Azam. Even though he has managed to contribute for his consistently, you have admit that Virat Kohli, experience wise is still far ahead than Babar Azam.

But there is no denying that both of them are truly world class batsmen and deservedly the superstars of their respective country.

There is everyday that you would see some people discussing who among the two is a better batter. However, many also believes that Virat Kohli is little bit ahead of Babar Azam because of the former experience and success that he has got over the years, while Babar Azam has just begun.

Indian pace bowler Mohammed Shami was also of the same opinion. In a candid chat with India.com, Mohammed Shami stated that it would be unfair to compare Babar Azam with the likes of Virat Kohli, Steve Smith or Joe Root, but still admit that Babar is a great player.

He further added that Babar Azam should first play as much as all the above mentioned names and then one should compare them.

M Shami: No doubt Babar is a great player. But to compare him with likes of Smith, Root or Kohli will be unfair on him. let him play for that many years and then we can judge. if he continues to play like that, then he would obviously end his career as one of the greats #PSL7

Stats wise, Virat Kohli has mastered the game with almost 451 matches across all formats of the game, and has scored over 23,000 runs and has more tha 70 International centuries to his name.

As for Babar Azam, the Pakistan skipper has played about 190 International matches across the format and has scored near about 9,000 runs, which feels like baby step compared to Virat Kohli’s number.