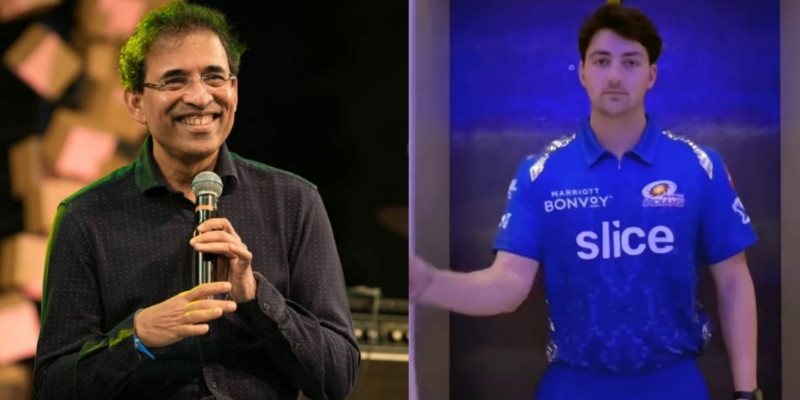 Arguably, Mumbai Indians are the best IPL franchise in the history of the Indian Premier League. And they are the only team to win the title five times. But their strategy in the 2022 auction didn’t go as planned. MI retained their core group of players (Rohit, Bumrah, Suryakumar, and Pollard) ahead of the auction. The franchise then bought 21 more players at the auction, which included 13 uncapped players.

Do you agree with this, all you @mipaltan fans? https://t.co/Kw7tdfgIFq

Now, the biggest challenge for them is to build the right team and choose the best playing XI before the IPL starts. However, cricket commentator and journalist, Harsha Bhogle, has come up with his thoughts on their best possible XI for the upcoming season. In the video uploaded on his official Twitter handle, he shared his possible XI that might lift the 2022 title. Speaking on the show “Voice of Cricket” on Cricbuzz, Harsha has rated the MI as a good side heading into the tournament.

“Can the five-time champions add a sixth title” – Harsha Bhogle

Harsha has made some interesting choices in choosing his XI for Mumbai. He has also taken into consideration the current form and the injury issues. The 60-year-old has chosen Rohit Sharma and Ishan Kishan to open the innings for the franchise. Both batters will be the automatic choices in the team, with Rohit as the captain and Kishan as the wicket-keeper. For No. 3, he has made an interesting pick in Tilak Verma. The Andhra batsman was also part of the U19 World Cup winning squad. His numbers in T20s are also good. Tilak has played 15 T20s and scored 381 runs at an average and strike rate of 29.30 and 143.77, respectively.

For No. 4 and 5, Harsha has picked the two retained players in Suryakumar Yadav and Keiron Pollard. Both are the backbone of Mumbai’s middle-order batting and will need to step up. However, MI has a big hole to fill with the Pandya Brothers. Hardik and Krunal were both excellent middle-order batsmen and finishers at the end. And now, without them, the franchise needs to search for the ideal replacement.

Hence, the 60-year-old has picked Tim David and Daniel Sams as the two overseas all-rounders. Both can use the long handle. Tim David, in particular, can smash any bowling lineup. Sams has had a good BBL season with both bat and ball, so he could also be a good choice. Furthermore, adding to the bowling department, Harsha has picked Murugan Ashwin and Sanjay Yadav as the main spinners in the team. Mayank Markande will be their back-up spin option.

Jofra Archer will make a lethal combination with Jasprit Bumrah

On any given day, Bumrah will be the first choice fast bowler. He also pointed out that because Jofra Archer is not available due to his injury, his second pacer will be either Tymal Mills or Riley Meredith. Harsha Bhogle has rated the Mumbai Indians as the top four teams in the tournament and said that they might finish in the playoffs. But as per the history of the IPL, fans can see the Mumbai franchise lifting their 6th title in the upcoming season.