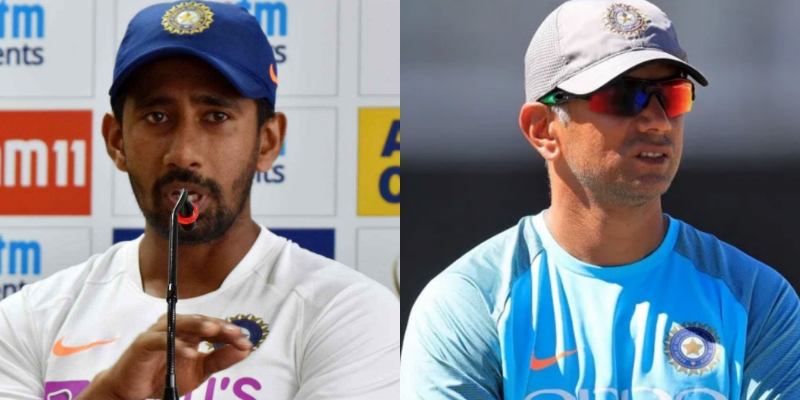 Indian wicketkeeper batsman Wriddhiman Saha could not find a place in the Indian team’s squad for the upcoming Test series against Sri Lanka starting in the first week of March. And now, he has made a bold claim that Indian team’s coach Rahul Dravid had suggested him to retire from International as he won’t get anymore opportunities.

The Indian cricket team is set to take on the neighborhood country Sri Lanka in a 2 match Test series taking place starting early March and the BCCI and the Chief Selectors have announced a 18 member squad for the series.

In the announced squad, some veteran of the Indian team didn’t find a place in the team as the team management is looking to add some fresh bones into the squad.

And one such player who didn’t got a chance is wicketkeeper batsman Wriddhiman Saha. After which, he made a very bold claim about the inside stories.

He told a media person that he was already told that he won’t be considered but he didn’t disclose it as he was still part of the set-up. He also added that Team India Head Coach Rahul Dravid had suggested him to take retirement from International cricket.

He said, “Even coach Rahul Dravid suggested that I think about taking retirement.”

He also mentioned about receiving a confidence booster from BCCI President Sourav Ganguly. He said that after he scored 61 runs against New Zealand after taking pain-killer, Saurav Ganguly messaged him and congraluted him.

Then he added that Sourav told him that Saha should not worry about selection as long as Ganguly is BCCI President. Saha said that he got a big morale boost following that, but couldn’t believe what happened after that.

On Saturday, the Indian team’s chief selectors announced a 18 member squad for the 2 match Test series against Sri Lanka. Other than Saha, veterans like Ajinkya Rahane, Cheteshwar Pujara and Ishant Sharma have been dropped from the team.