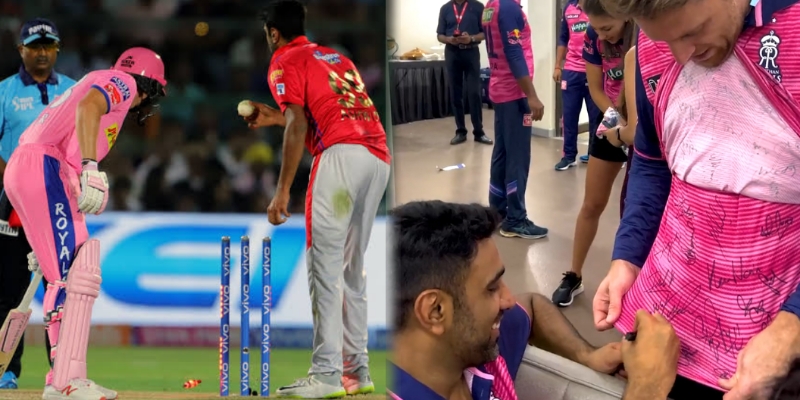 The Indian Premier League (IPL) 2022 season has come to an end as Gujarat Titans beat the Rajasthan Royals to lift the Trophy in their first season in the IPL, but there was a great spirit in display when Ashwin signed Buttler’s jersey before the Englishmen leave for country.

With the Indian Premier League (IPL) 2022 season is now over, it is now time for the players to return to national camp for the upcoming series, so should the overseas, it is now the time for them to leave the team after being together for 2 months.

Rajasthan Royals most recently shared a video of England batsman Jos Buttler, who was the star for Rajasthan based team and the best player of the IPL 2022, preparing to leave the camp for his nation.

But in the video, what we saw was a great moment. In the video uploaded by the franchise, Ravichandran Ashwin was signing the jersey for Jos Buttler, which seemed quite great, given the rivalry the duo had in the past.

It takes us back to the year 2019 season of the Indian Premier League (IPL), when Ashwin was playing for the Punjab Kings, while Buttler was then also playing for the Rajasthan Royals.

It was the 4th match of the IPL 2019 season when it was really like impossible to get the wicket of Jos Buttler. But, then came a moment when Ashwin found Buttler out of his crease even before he bowled, so he just run him out on the non-striker end. The incident created a big controversy.

And in even more shocking news, Rajasthan Royals snapped-up the services of Ravichandran Ashwin for the IPL 2022, while they had already retained Jos Buttler.

However, the duo forgot all the controversy that happened in the past and worked together and helped the team reach the final, which they unfortunately lost. Watch the video of Ashwin signing Buttler’s jersey.