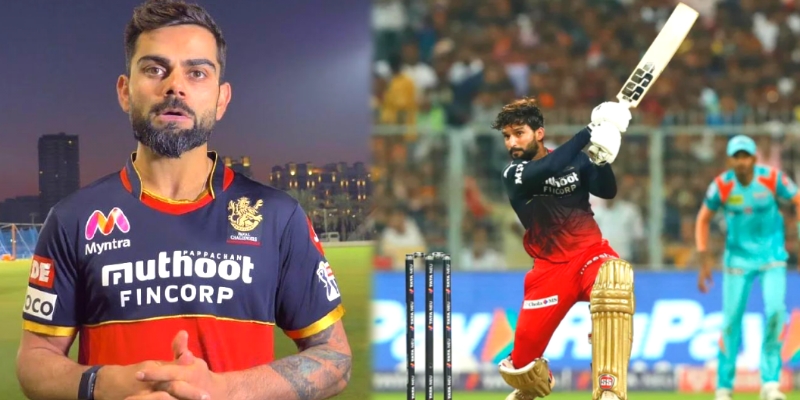 The 28-years-old Rajat Patidar’s inning against Lucknow Super Giants paved the way for the Royal Challengers Bangalore to qualify for the next stage of the playoffs and is just 2 steps away from lifting their 1st IPL Trophy.

Royal Challengers Bangalore is one of the founding members of the Indian Premier League (IPL) who are yet to win the elusive IPL Trophy. But this time, they are closer than ever.

Bangalore have advanced to the next round of the playoffs and will now take on the Rajasthan Royals in the Qualifier 2 of the Indian Premier League (IPL) 2022, the winners of which will go on to the Grand Finale against Gujarat Titans.

The 28-years-old Madhya Pradesh batsman Rajat Patidar led the charge for the Faf du Plessis led side with a brilliant century, that proved very vital at the end of the match.

Having lost the toss, Faf lost his wicket for Golden Duck. But then, it was just Rajat Patidar show thereafter. Patidar scored 112 runs not out from 54 balls, that involved 12 boundaries and 7 sixes at a strike rate of 207.41.

While chasing 208 runs, other than skipper KL Rahul (79 runs) and Deepak Hooda (45 runs), everyone else failed to deliver and could only score 193 runs from their 20 overs.

After the match, former India and RCB skipper Virat Kohli praised the batter. He said that he has seen many innings under pressure, but have not seen something like what Rajat did.

“I told him as well after the game as well that I have seen many impact innings and many innings under pressure over so many years. I have not seen many better than how Rajat played today. Under pressure, big game, first uncapped player,” said the former India captain.

He added that it was a game of a high magnitude and the tension was in the air and what Patidar did was very very special and does, no one should take that inning for granted.