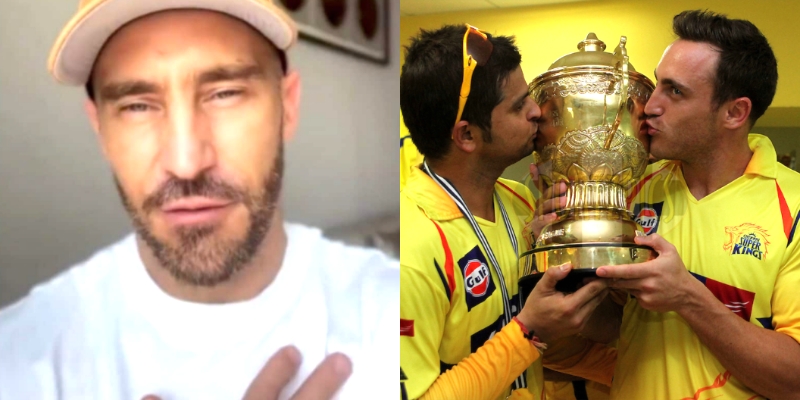 The two-day event of the IPL 2022 Auction is finally over. And every IPL team has got a new set of players in their squad. Some teams got what they wanted, but some were not so lucky in that. BCCI shortlisted a total of 590 players to come under the hammer. 204 players were sold as a result of this. However, the defending champions, CSK, did get some of their released players, but a few of them were bought by other teams.

Former South Africa skipper Faf du Plessis is one of those player. The former CSK member will now play for RCB from this season. Chennai tried to get him back, but it was RCB who won the bid. RCB signed Faf at a price of INR 7 crore.

Du Plessis was part of the Yellow Army in 2011–2015 and later in the 2018–2021 seasons. He was a crucial member of CSK’s four title triumphs. Faf was the second-highest run-scorer for them last year, just 3 runs short of Ritutaj Gaikwad. He was the Man of the Match in the grand final of IPL 2021. The former South Skipper took to his Instagram and shared an emotional video message, thanking CSK for all the memories.

The former South Africa skipper mentioned how well his decade-long journey has been with CSK, its fans and its management. Faf shared all these things in the video message he posted.

Faf thanked CSK and the fans for all the memories. However, he also expressed that he is very excited to be part of RCB. Faf further added,

“You create a lot of special memories. I think it’s really important for me to say thank you.”

Faf also pointed out the next opportunity he has got with Royal Challengers Bangalore. The right-handed batter appears to be looking forward to playing for his future team in the upcoming season.However, he showed his gratitude towards CSK and the fans on behalf of him and his family.

Chennai did get some of its released players back in the auction. Robin Uthappa (INR 2 crore), Dwayne Bravo (INR 4.4 Crore), Ambati Rayudu (INR 6.75 Crore), and Deepak Chahar (INR 14 Crore) are the players who will be part of the team again.