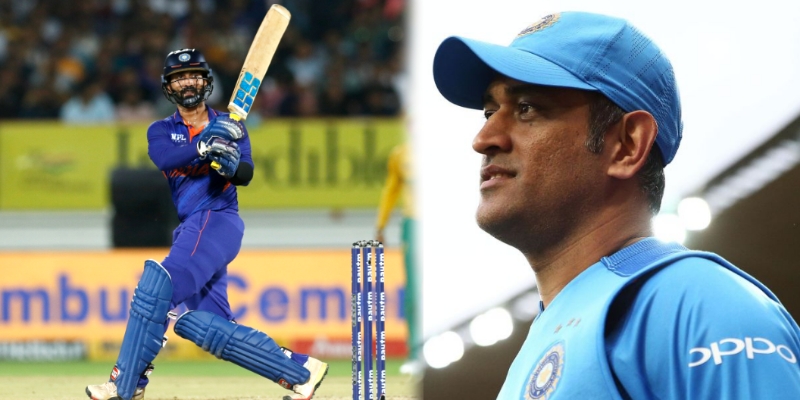 Return to International cricket has been a fairytale for Dinesh Karthik as he continues to impress the fans and the critics and his performance tonight further boosts his chances of a spot in the Indian team for the World Cup. Meanwhile, he has surpassed former India skipper MS Dhoni after his tonight’s inning.

The last couple of months of Dinesh Karthik have a story to be inspired of. From rejoining the Royal Challengers Bangalore for the IPL 2022, to being one of their best player, to now making a comeback into the Indian team.

He has so far lived-up to the role that he has been assigned with. Karthik has been playing the role of a finisher for Team India in the ongoing series against South Africa.

He once again proved to a brilliant addition into the Indian team when he helped Team India tonight to post a fighting total, playing a knock of 55 runs from 27 balls.

While MS Dhoni had scored his fifty in a T20I match when he was aged 36-years 229 days. But now, Karthik holds the record as he scored his half-century tonight when he is aged 37-years and 16 days.

As for the match, thanks to valuable contributions from Hardik Pandya and Dinesh Karthik, Team India posted a target of 170 runs for South Africa. And as of writing this article, South Africa have lost 4 wickets for the score of 59 runs from 11 overs. This is a do-or-die match for India and a win is must to keep the series alive going into the last match of the series.