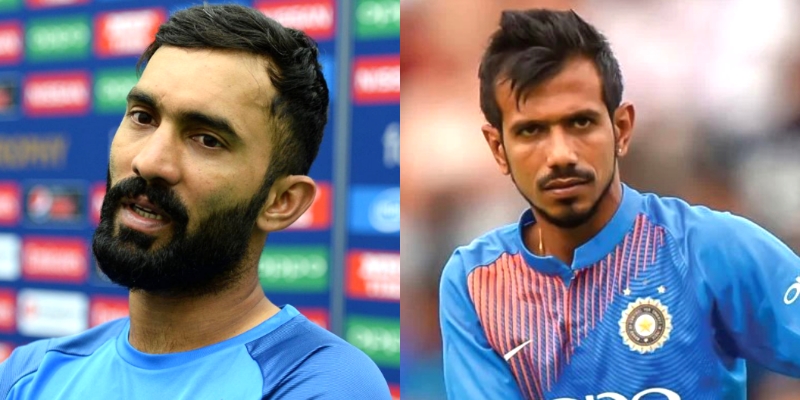 Former Indian wicketkeeper batsman Dinesh Karthik, who is waiting for an opportunity to return to the Indian team, has made a massive statement and has named young Ravi Bishnoi as Yuzvendra Chahal’s replacement in Team India.

The whole country was shocked when the India squad for the T20 World Cup 2021 was announced and Yuzvendra Chahal was not there and raised questions.

It further got devastated when Team India were knocked out of the group stages of the competition. Chahal did made his return for the New Zealand and South Africa series, but failed to impress the fans and the critics.

The Haryana born leg-spin bowler has been completely different compare to the Yuzvendra Chahal who the fans were assured to get a wicket from every match. A great example of that would Chahal’s struggle to get wicket in the recently concluded South Africa ODI series where he only 2 wickets from 3 matches.

Dinesh Karthik recently spoke on the Cricbuzz Live YouTube show, where he called Chahal lucky to keep hold of the place because of lack of competition for wrist spinners, and mentioned Ravi Bishnoi to succeed him.

He stated, “At moment, other than Chahal, if you got to pick a wrist-spinner, then there is Rahul Chahar and Ravi Bishnoi. And looking at the way things have panned out, I do feel Bishnoi is ahead at the moment right now.”

Karthik also stated that the lack of domestic cricket due to COVID-19 is playing a big role in lack of competition for places in the team.

Both Ravi Bishnoi and Yuzvendra Chahal has been called-up for the upcoming T20I and ODI series against West Indies that kicks-off from the 6th of February and it will be interesting to see who is ahead in the pecking order.

England’s Reece Topley makes himself unavailable for PSL 2022 just before joining Islamabad United
“If he is not in the team, I will play. Otherwise I won’t play”- Mehidy Hasan lashes out at BPL team after being sacked as captain
To Top