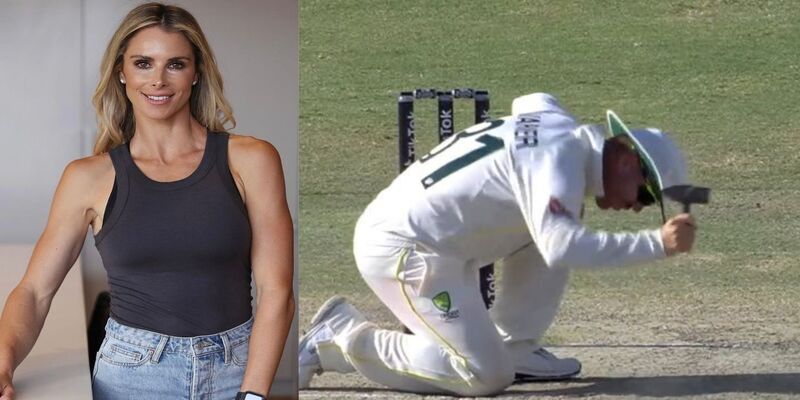 Australia and Pakistan are currently playing a three-match Test series. And this is the first time since 1998 that any Australian side is playing a bilateral series against the Men in Green in their own backyards. A tour after 24 years makes it special in the history of both teams. But so far, this tour hasn’t gone as per the expectations of the cricket fans.

Both the Test matches ended in a draw as the pitches used for the matches were totally flat. And that’s the reason the Pakistani board faced a lot of backlash from many ex-cricketers and fans across the world. However, the second match will be remembered for the heroic efforts of the Pakistani skipper, Babar Azam, but there were some other things that caught the attention of the fans as well. A video has gone viral on social media of Australian skipper Pat Cummins and opener David Warner trying to fix the pitch with a hammer at National Stadium Karachi.

Fans across the world are sharing this viral video on social platforms. On the other hand, PCB has also shared another clip of both the players trying to fix the pitch with the hammer in their hands during Day 5 of the second match. The Pakistan Board shared the video on their official Twitter handle with a funny caption. PCB tweeted the video, writing, “The Thor hammer made another cameo today.”

The incident took place during the second innings of Pakistan. The hosts were at 380/4 when opener Warner used a hammer to settle the foot-marks off the bowling crease. Fans also enjoyed the video and laughed at it. And the video went viral in a quick time, and it even made Warner’s wife, Candice Warner, retweet the video and troll her husband.

Candice retweeted the video and mentioned, “I wish @davidwarner31 would do this a little bit more around the house!” He asked Warner to do this work at home as well.

After two back-to-back draws, both teams will be heading to Lahore for the final match. It makes it more interesting as the win at Lahore will also be a series win.